Thank you for stopping by, Anna!

Anna Patricio is a lover of ancient history, with a particular interest in Egypt, Israel, Greece, and Rome. She is also intrigued by the Ancient Near East, though she has not delved too much into it but hopes to one day.

She undertook formal studies in Ancient History at Macquarie University. She focused mostly on Egyptology and Jewish-Christian Studies, alongside a couple of Greco-Roman units, and one on Archaeology. Though she knew there were very limited job openings for ancient history graduates, she pursued her degree anyway as it was something she had always been passionate about.

Then, about a year after her graduation, the idea to tackle historical fiction appeared in her head, and she began happily pounding away on her laptop. Asenath is her first novel.

Recently, she traveled to Lower Egypt (specifically Cairo and the Sinai), Israel, and Jordan. She plans to return to Egypt soon, and see more of it. In the past, she has also been to Athens and Rome.

Anna is currently working on a second novel, which still takes place in Ancient Egypt, but hundreds of years after Asenath.

Passion and enthusiasm for the topic I am writing about. It may sound like a no-brainer, but when I was writing Asenath, I realised that that factor was more important than I realised. Because I love the story of Joseph, it was not difficult to get to work on the novel. It was really fun.

Which brings me to the next item…

2. How did you come up with the idea for your current story?

As I mentioned above, I love the story of Joseph. I really admire his strength and compassion. Plus, I adore those rags-to-riches type of stories—Cinderella-esque stories, if you prefer.

Somewhere along the way, I grew curious about his wife Asenath. She is only briefly mentioned: she was the daughter of a priest who was given in marriage to Joseph as the latter’s reward for interpreting Pharaoh’s dreams.

I looked her up in the net and the library and found hardly anything on her. I then grew inspired to imagine what she might have been like.

What motivated me further was that the fictional retellings I had read of Joseph did not focus much on Asenath. Sure, she appeared more lengthily than in the Bible. But all the Joseph novels I’ve read focus on the relationship between him and his brothers or father. I then thought it would be a good idea to write a novel that focused on the relationship between him and his wife.

3. What is your favorite scene in the book? Why?

I guess it would be one particular scene between Joseph and Asenath near the end. I can’t elaborate though as it may give a lot away. But when I was revising Asenath, I was always excited to reach that scene.

I have gotten mixed reactions on that scene, by the way. But it was very fulfilling to hear one reader tell me that that scene moved her to tears.

Before submitting to a publisher or agent, look them up. Sad to say, there are a lot of unscrupulous characters out there.

Thankfully, I am with a good publisher. But in the early days (way before I finalized Asenath), when I was researching publishers and agents, I came across some that I thought I could submit to. However, I later discovered that they were scams.

5. What is in your To Read Pile that you are dying to start or upcoming release you can’t wait for?

Gary Jennings’ Aztec. A friend of mine highly recommended it to me, and I recently bought a copy. It looks very promising, although I was warned it can be extremely graphic. But it looks good, and I live for good novels.

I will read it after my current read, Charles Dickens’ David Copperfield.

6. How do you spend your free time? Do you have a favorite place to go and unwind?

Obviously, I like to read. Aside from that, I like to watch TV or movies, listen to music, dabble in some amateur photography and play with my dog.

Actually, right now, I am spending a lot of time with my quasi-new dachshund puppy, Choco (I’ve had her for about 4 months now). She’s a bit of a scaredy-cat – or should I say scaredy-dog – so I’m trying to help her feel at home. She seems to be more at ease now than she was when she first came here. She is becoming more adventurous: she loves to go hunting, being a hound and all, and she loves playing fetch. She runs like lightning! 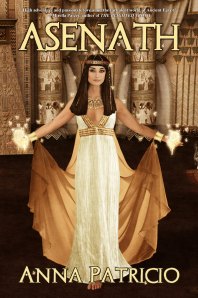 In a humble fishing village on the shores of the Nile lives Asenath, a fisherman’s daughter who has everything she could want. Until her perfect world is shattered.

When a warring jungle tribe ransacks the village and kidnaps her, separating her from her parents, she is forced to live as a slave. And she begins a journey that will culminate in the meeting of a handsome and kind steward named Joseph.

Like her, Joseph was taken away from his home, and it is in him that Asenath comes to find solace…and love. But just as they are beginning to form a bond, Joseph is betrayed by his master’s wife and thrown into prison.

Is Asenath doomed to a lifetime of losing everything and everyone she loves?

Abbey’s Bookshop (for those in Sydney, Australia) http://www.abbeys.com.au/abbeys/home.do