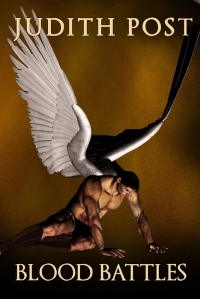 I was one of those girls who always loved school and books, so I studied to become an elementary school teacher, thinking I’d inspire kids to love learning as much as I did.  News Flash.  Not every kid is enamored of math and reading.  The good news?  I love kids too.  So I even enjoyed the ones who fought learning every inch of the way.  When I had my daughters, though, and stayed home to raise them—supposedly until they reached first and third grade–the laws changed, and no one wanted a teacher with a master’s degree in our state, so I took up writing as a hobby.  Big mistake.  I’ve never quit.  I love it more the longer I write.

1. How did you come up with the idea for your current story?

Blood Battles is the novel that follows Fallen Angels.  The books started when I asked myself, What would happen if an angel wanted to join Lucifer when he rebelled and was thrown in the pit, but another angel—a friend—stopped him?  And what if, instead of being grateful, Caleb, the rebel angel, was furious?  He didn’t see himself as saved from the pit, but stuck in Heaven?  So he says so, and he’s thrown to Earth to repent—but likes it there.  He learns that mortals’ blood can replenish him almost as well as the Light did, and he infects humans with his own immortality, creating vampires.  His friend, Enoch, is sent to Earth to clean up Caleb’s mess.  But Enoch discovers that some vampires cave to their bloodlust, while others fight it.  And he respects and admires them for that.  So he befriends the good vampires and falls in love with Voronika—and his life just gets more and more complicated, until in Blood Battles, he teams up with the good vampires to save them from the rogues who want to destroy them. And the vampire war begins.

2. Tell us about your writing process. 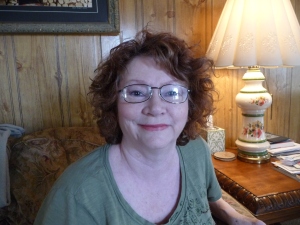 When I wrote mysteries, I was an outline fanatic, so that I could keep track of clues and red herrings.  Didn’t help me.  None of the novels sold.  A few came close, but no cigar.  Urban fantasy feels more fluid, more flexible, so for my novels or novellas, after I get the big idea that hooks me, I like to think of the opening scene, then the setting and set-up. I like two or three plot twists after that, and I always have to know the end.  If I have the twists to aim for, I know I won’t go off on too big of a tangent while I try to get there.  And then I create the characters who’ll lead me a merry chase along the way.  I make a character wheel for each one of them, so they become living, breathing people in my head.  (Shirley Jump, a romance writer, gave a workshop on character wheels and teaches classes on them.  They work for me!)

3. What is your favorite scene in the book?  Why?

When I finished the novel and sent it to my agent, she didn’t ask for ANY rewrites. BUT she wanted a scene added to the end of the book that showed Enoch and Voronika at their friends’ wedding. The wedding had been mentioned through the entire story, but I never showed it, and she felt gypped.  More
than that, the wedding is personally meaningful to Enoch and Voronika.  Intimate scenes aren’t my strong point.  I struggle with them, and I try to avoid
them, but this one almost wrote itself. It felt right.  And Lauren really liked it.  I surprised myself.  I liked it too.

Someday, I’d like to write novels that are as wonderful as my favorite authors—Elizabeth George (mystery), Patricia Briggs, Ilona Andrews, and Faith Hunter’s Jane Yellowrock series—but I want to do it MY way.  I want to learn the right balance of plot, pacing, characters, and voice and combine them into an intoxicating brew that keeps readers turning the pages and waiting for the next book.

Not in the afterlife (because I’m not in a big hurry to get there), but through mysticism or magic, I’d love to meet Agatha Christie.  I still love her mystery
puzzles, and she struck me as such an interesting person—divorced and then remarried to a younger man who was an archaeologist.  She went on digs with him.  Raised a daughter.  Loved to try new things.  And what a mind!  I might not want to meet her for lunch, though, unless I was sure my tea or sandwich wasn’t poisoned.

6. What is the best piece of advice you would give to someone that wants to get into writing?

2nd :  Pay attention to the things that make you like one author more than another, study what they do and how.

3rd :  Sit down and write.  Try to do your best, but give yourself permission to mess up.  It takes time to develop your own style and voice.  Just do it until you get better.

4th :  There are lots of writing how-to books and workshops and classes and blogs.  Read them.  Learn from them.  But mostly, just keep writing.

5th:  As Kurt Vonnegut said, “Don’t quit your day job.”  It all takes time.  Be patient with yourself.

7. How do you spend your free time?  Do you have a favorite place to go and unwind?

I love puttering in my kitchen.  Cooking relaxes me.  That’s why I joined the Foodie Group on Goodreads.  (I can’t say enough good things about Goodreads, by the way).  I can sit and flip through cookbooks and be a happy girl.  I’m hooked on foodtv, and my husband tries to keep me away from In the Kitchen with all of its gadgets on QVC.  Zesters can look impossible to resist.

A mob boss is staked when he walks out onto a high balcony.  Five of Caleb’s vampire generals are staked during the day while they sleep. And finally, a mortal is staked in Three Rivers while he’s working late at his office.  Enoch won’t allow rogue vampires in his city.  If they hunt in Three Rivers, he returns the favor.  But he soon learns that much more is brewing in the vampire world.  A war’s coming between rogue vampires and his former friend’s generals.  Enoch’s still
angry at Caleb, but he vows to help the good vampires any way he can.  He has no idea who their enemy is or how many enemies they face, but he soon discovers the battle’s far bigger than he ever imagined.