Today I’m welcoming Isaac Solomon, author of Emanuel Stone and the Phoenix Shadow. Thank you for stopping by, Isaac!

Born in the Republic of Panama, Isaac Solomon moved to live in the UK with his mother and two older brothers at the age of four. He studied undergraduate law for 2 years and was an international volunteer worker in the Middle East. A keen writer, sculptor and organic gardener, he now lives in Nottingham, England.

I love reading about historical mysteries and I enjoy reading books that challenge the way I think. I have always believed that a world filled with fantasy, where anything is possible makes life much more interesting. As a result I have written a book that is both thought provoking and presented with elements of fantasy and fiction to make it entertaining.

2. How did you come with the idea for your current story? 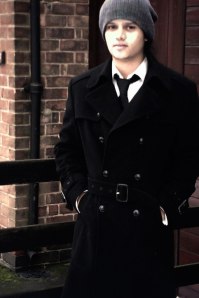 Given the current sub-culture where the word real has become ambiguous in meaning and quite often things are not what they appear to be; it was my aim to comment on several topics often discussed by people everywhere and offer a new perspective. For example: With all the advanced technologies, tracking systems and communication devices, today, why do millions of people simply vanish each year? Why are legends of mythical creatures so similar around the world?

I can’t just sit at a computer and write. For me the best way to effectively communicate my ideas is to work at night writing long hand with pen and paper. I do outline chapters but most often the chapters never follow the set plan. I am really more of a ‘seat of your pants writer’, and can rewrite a chapter several times before I am content with it.

My favourite scene is in chapter 7, where the Psychosis of Emanuel’s father is exposed. I enjoy this scene because it directly relates to the underlying theme of the book, that ‘things aren’t always as they appear to be’.

Follow your heart and never give up. Be careful who you share your dream with because people can kill your dreams with their words.

6. What do you have in store next for your reader?

This book is the first in a trilogy following the odyssey of Emanuel Stone as he develops into a man of strength.  The first book sets the scene for the following works of the series and ends on a cliffhanger. In the second book we will see Emanuel Stone’s character begin to develop as he finds his purpose in life. Finally in the third book as the world around him is collapsing, Emanuel Stone comes into his own.

My favourite authors are C.S Lewis and William Golding. I love both of these writers because of their originality and also because their works have deeper meaning to them.

Emanuel Stone and the Phoenix Shadow

In the beginning, life was sweet for Nottingham teenager Emanuel Stone, until a gruesome triple killing changed his young life forever. Tormented by terrifying nightmares, Emanuel struggles in his grief to find hope and meaning to his life. In the chaos and near anarchy of 2024 would his young heart ever heal? Was there to be a purpose to his life?

Spanning thousands of miles, from the high mountains of Peru to a sleepy Scottish village, a drama unfolds – of love, betrayal, deceit and intrigue. In a bizarre twist, Emanuel finds himself unwittingly drawn into a vortex of international terrorism. Just who are the old man and the stunning blonde in the apartment next door?