Mark W. Sasse was born in Western Pennsylvania, but has spent nearly two decades living, teaching, and writing overseas in Vietnam and Malaysia. He has advanced degrees in Humanities and English. His first novel, Beauty Rising, was released in December 2012, which was followed up by The Recluse Storyteller in October 2013.

Sasse has produced a variety of dramatic works such as “Grandparents’ War”, “Life with Stewart”, and “Spy Blue”. His short play, “No in Spite of Itself”, won the Best Script Award at the 2013 Short & Sweet Theatre Festival Penang. Sasse’s works are known for unique and unpredictable plot-lines, strong characters, and thought-provoking dialogue. Besides writing novels, he also writes and directs for the drama troupe The RLT Players.

1. What is your favorite scene in the book? Why?

One of the scenes I really enjoyed writing was part of the recluse storyteller’s story called “Red Hat.” He is this bad-dude terrorist, of sorts, and as he is leaving a scene where he just killed a man, two bumbling aunties accidentally drop a flower-pot from their apartment balcony and it hits Red Hat in the head, knocking him out cold. The frantic old aunties carry the poor man up to their apartment. When he wakes up, he is in for the surprise of his life – two old spinsters who haven’t had a man around in years. It’s quite funny.

2. What is your usual writing routine? 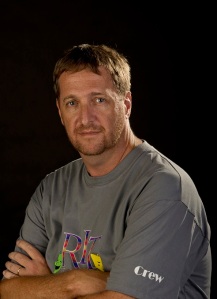 My writing has seasons. When I’m “in season” I’ll write 2-3 hours a day, usually from a beautiful spot out near the ocean. The next day I’ll come back and read through and edit what I wrote and then pick up from there. When my writing is “out of season” I typically try to do a little promotion each day. Oh, and I try to write a daily blog post, as well.

3. What is the highest goal that you desire to meet as an author?

My goal is to one day write as my profession. I love creating stories and sharing them with others. I’ve been humbled by the response so far, that’s for sure. I think it would be a dream come true to be able to support my family through my writing.

Don’t listen to the critics in your head. Don’t listen to the critics outside your head. Just write. If you have a passion for writing, don’t let anyone stop you. Write what’s on your heart and just be yourself. Don’t try to write like anyone else. It will just be disingenuous. I should know. I went twenty years being afraid to write anything. Now I regret it, so I write as often as I can now. You should, too!

Someday, I’d love to take my wife on a tour of Europe.

6. Tell us three fun facts about yourself.

I love baseball. (The Pirates!) I love live theatre and have written nearly a dozen full-length plays for the stage. I love to cook.

I’m very excited about 2014. My third novel, The Reach of the Banyan Tree, is finished and currently being read by some beta-readers. It is the novel I tried to write 12 years ago and couldn’t. It’s set in Vietnam in the years 2000 and 1945. It’s an amazing story about love, family, and culture. I can’t wait for its release. ETA: mid-2014. I’m also 33,000 words into my fourth novel. I’m really excited about it. It’s based on a short play that I wrote called “Almighty Might”, but the novel will have a different title. Estimated release date of early 2015. I’m also producing a full-length musical I wrote with some of my students. It will be performed in Penang in May 2014.

The twins, beckoned by an ominous streak of light across the sky, climb Harper’s Hill to encounter an apparition of their missing father.

The reverend stands on a muddy ridge, the barrel of a rifle in his neck, looking down on a Vietnamese village, scarred by war and regret.

The brash terrorist, Red Hat, desperately tries to walk away from life unscathed and unattached.

The stories haunt Margaret every waking moment, but they are anything but random. A fractured view Michael Cheevers’ red hat through a discreetly cracked door sends her off on adventure. A glimpse of the Johnson twins from apartment 2D transports her mind to the lonely hill on a Midwestern prairie in 1887. The regular letters from Reverend Davies bring her to the brink of exhaustion as she stares intensely into the heart of war, deep in the jungle of Vietnam.

Margaret is not insane, at least not in a clinical sense. She’s like a midnight raccoon, painfully aware of her surroundings, gleaning crumbs of information at every turn. Her eyes peer incessantly in the night, stealing glances of the neighbors through partially opened doors.

But the tales she weaves were not meant to merely hold empty court to the receptive dead air of her apartment. Her stories were meant to embolden the lives of the inhabitants of that drab apartment block because her story is also their story–and everything would be different if they could only hear the prophetic words of the rambling recluse.

The Recluse Storyteller weaves five stories into one as the loner, Margaret, not only searches for meaning from her reclusive life, but also gives meaning in the most unexpected ways to the troubled souls of her apartment complex. Part adventure, part tragedy, and part discovery, The Recluse Storyteller bridges genres, bringing hope, life, and redemption to the broken relationships of modern society.