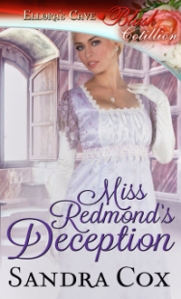 When Captain Richard Greyston encounters three figures in a graveyard, he takes them for a spectral visitation until he realizes it is two young ladies—in their nightgowns, no less—and their spinsterish companion. A spinster with slender limbs and an enchantingly velvety voice.

Pembra doesn’t care a whit for the captain’s opinion of her, even after circumstances force them into a sham betrothal. But when a gypsy warns her that his life hangs in the balance, she begins to realize that her heart is not so uninvolved as she might like to pretend

Multi-published author Sandra Cox writes Crossover YA, YA Fantasy, Paranormal Romance, Time Travel Romance and Metaphysical Nonfiction. She lives in sunny North Carolina with her husband, a brood of critters and an occasional foster cat. Although shopping is high on the list, her greatest pleasure is sitting on her porch, listening to the birds, sipping coffee and enjoying a good book. She’s a vegetarian and has a yellow belt in Muay Thai.

“Where’s everyone going?” she muttered. Her curiosity aroused, Pembra slipped out the door behind her sisters, keeping the spectral white nightgowns in sight as she stayed in the shadows. Her heart gave a hard ka-thump at the nearby screech of an owl. Ignoring it, she kept going.

What are they up to? Pembra watched Sabrina follow Emma, who followed Betsy.

The maid turned off the path into the small graveyard located behind the rectory. She forgot to watch Betsy as she stared in astonishment at Emma sinking behind a large tombstone, like a specter sinking into the grave, while Sabrina crept up behind her.

Pembra tiptoed closer until she heard subdued voices. She braced her hands against the rough bark of an oak. Hidden, she leaned forward to hear.

“Emma what are you doing here?” Sabrina demanded.

Emma clamped a hand over her own mouth, muffling her shriek. “What are you doing here?” she hissed back.

“Gosh, you scared me.” Emma pulled Sabrina down beside her.

“At the risk of being repetitive, what are you doing here?”

“Following Betsy. You’ll never believe it, but she’s out there with Adolphus Webster.”

“The rector’s son?” Sabrina gasped in shock. “Surely you’re mistaken. That platter-faced prig wouldn’t have the nerve to meet anyone.”

“Oh, no? Well just take a look at that. Meeting is hardly the word for what’s going on.” Emma giggled.

“Oh my.” Sabrina clapped her hand over Emma’s eyes while peeking over the top of the tombstone.

“You are much too young to witness such disreputable behavior,” her sibling scolded.

“Yes, and you are so much more worldly,” Emma grumbled, as she pried away Sabrina’s fingers.

“Well, I’m worldly enough to know if Pembra finds out about this, its curtains for Betsy,” Sabrina replied, indignant.

The girls—so awake to the carnal pursuits under the maple tree—were paying not the least attention to their immediate surroundings.

Pembra stepped out from her hiding place. “If Pembra finds out about what?”

“Eeekk.” Both girls screeched and jumped up in fright.

It was unfortunate indeed that Captain the Honorable Richard Greyston, late of the Household Brigade, grandson and only heir of the fifth Earl of Meade, had taken a wrong turn and was cantering by on his temperamental stallion, when the girls rose shrieking from behind the tombstone.

“Bloody hell,” floated on the clear night air as Greyston fought to get his mount under control, not quite believing what he was seeing as three ghostly apparitions stared at him from behind an ancient funerary marker.

When his mount Doondiah was quieted down, Greyston unobtrusively drew a pistol from an inside pocket of his great coat. Nudging the stallion with his knees, he approached cautiously. Though, damned if he knew what good a pistol would be against a ghost, much less three.

Greyston gave a snort of disgust as he drew nearer and saw that his ghostly apparitions were only girls, at least the two clutching each other were. The third was definitely an old maid wearing a ridiculous mobcap, pulled down nearly to her thick spectacles, and a night rail that had enough material in it to serve as an army tent.

“You damn fool,” he told his horse succinctly.

“That will be enough of that language in front of innocent young females, sir,” the old maid snapped, stepping forward.

Spoken like a true spinster. He sighed inwardly. But ye gods, the voice. Velvety as night. Low and smoky as sin. A nightingale sound that conjured up forbidden delights. If his mistress had a voice like that he’d never leave her side. A lot could be forgiven resonance like that even if it came from a dried up old spinster.

He moderated his cutting rejoinder to a mild, “Madam, what are you doing out here?”