Between fighting a race of magic-wielding winged monsters, scaling Krakens, blinding Cyclops, running from Sirens, and being abducted by pirates it’s all Arc Arcanum can do to keep his head on straight; literally. After losing the only home he’s ever known, and with nowhere else to turn, Arc enlists with the Human Liberation Front to fight against a ruthless species known as the Winged Ones and prevent them from unleashing a world-wide human holocaust. He’s tasked (completely by accident) with escorting humanity’s last hope, a red-eyed android named Celeste, across the sea to one of the few remaining human safe havens. To make matters worse he’s accompanied by two fellow cadets: the feisty vixen Rose and the polyamorous playboy Prince, both of whom seem entirely set on making sure nothing goes as planned. It’s a magical journey that proves blood isn’t the only bond that makes a family. 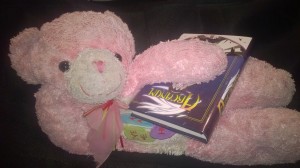 M. C. Moulton is currently living in Kansas and trying desperately not to be swept away by a tornado to a magical land of munchkins. In his off time he’s lazily at work on the Arcanum sequels or playing way too many video games.

1. Tell us about your writing process. Do you outline, or are you more of a seat of your pants type of a writer?

I am most definitely a “By the seat of your pants” type of writer. I usually say, “Okay, everyone starts at point A and by the end of the book I need them to be at point B” and sort of just let the characters do their own thing from there. When ideas hit me I try my best to find some way to incorporate them. That’s not to say I’m just making it all up as I go along, I do have a general outline of the entire plot in my head, but like I said before, it’s mostly a point A and point B sort of thing.

Anything and everything. So many things I loved growing up have weaseled their way into the story from video games, anime, cartoons, comic books, etc. I guess I should say I find inspiration in my hobbies, and I think if anyone isn’t get inspiration from their hobbies then they need a new one.

3. What is your most interesting writing quirk?

I tend to read my dialogue out loud, even as I’m writing it. I feel it helps make it sound more natural.

Ctrl+s is your best friend in the whole world. Woo it and stroke it often otherwise…well, lightning happens.

5. How do you spend your free time? Do you have a favorite place to go and unwind?

Procrastinating. Working from home can be the absolute worst thing in the world for a procrastinator. I get distracted by everything. I don’t have any sort of zen spot that I go to unwind, I’m more excited to actually get out of the house.

Lots more Arcanum. It’s going to be five books and a prequel. So, yay for you if you enjoyed it, and if not well…