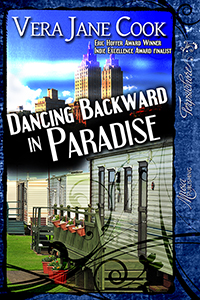 Life for Grace Place is all about sucking on “meat jerkys” and Lenny Bean, her handsome lover. Grace’s mother has loftier plans for her daughter. She insists that Grace save her money and move to New York City so she can find fame and fortune as an actress.

Grace works as a cleaning lady for wealthy Betty Ann Houseman so she can pool her pennies for the trip north. Betty Ann has a passion for men more pronounced than her overbite, and it isn’t long before she’s parting the sheets for Lenny Bean. But just before Grace leaves Hixson for New York City, she uncovers an insidious plot: the Bean family is trying to steal Betty Ann’s estate.

Grace flees to New York, where she faces her darkest hours. In a world of surprises, Grace truly discovers paradise. 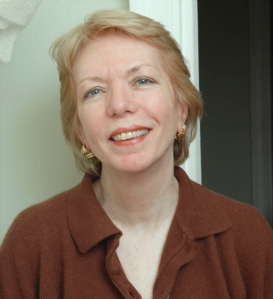 Vera Jane Cook, writer of Award Winning Women’s Fiction, is the author of The Story of Sassy Sweetwater, Lies a River Deep, Where the Wildflowers Grow, Dancing Backward in Paradise and Annabel Horton, Lost Witch of Salem.

Jane, as she is known to family and friends, was born in New York City and grew up amid the eccentricity of her southern and glamorous mother on the Upper West and Upper East Side of Manhattan.

An only child, Jane turned to reading novels at an early age and was deeply influenced by an eclectic group of authors. Some of her favorite authors today are Nelson DeMille, Calib Carr, Wally Lamb, Anne Rice, Sue Monk Kidd, Anita Shreve, Jodi Picoult, Alice Walker and Toni Morrison. Her favorite novels are too long to list but include The Story of Edgar Sawtelle, Cheri and The Last of Cheri, The Picture of Dorian Grey, Wuthering Heights, Look at Me, Dogs of Babel, The Bluest Eye, The Art of Racing in the Rain, Body Surfing, Lolita, The Brothers Karamazov, She’s Come Undone, Tale of Two Cities, etc., etc., etc.,

If you drive up there near the state line, on the border of Tennessee and Georgia, you just might pass through my hometown, the Chattanooga suburb of Hixson. But you might not know you passed it, not unless you take the time to read the sign hanging near the highway. Most people only stop in Hixson for the cemeteries and the old Civil War battlefields around Chattanooga. I grew up thinking a trip to Soddy Daisy was living the high life. But it was beautiful country, no matter what Mama says. I remember the back roads mostly, and the trees. When I was small, I’d spread my arms out as far as I could and I’d try to reach as wide as a tree’s branches. I’d dance in the wind, partner to the limbs of the old oak and the sugar maples. Trees seemed to be all the poetry I’d ever need.

Country living in Hixson wasn’t always peace and quiet though,with so many highways going every which way. But back where I lived, the back roads were all over. They were mysteries that flirted with my sense of adventure. I never could walk by a back road without wanting to follow it. There wasn’t anything finer to do with an afternoon than walk a road I’d never walked before. The narrow ones around Paradise were some of my favorite; they curved and twisted up into places that I could keep hidden from everybody else. I’ll always think of country roads like that, seducing me onto nature’s unknown paths. Sometimes those country roads led me back where I began. Sometimes they took me so far away I’d have to hitch home.

When I was a young girl, I never could sit still. Why, I’d be damned if I didn’t ruin the best pair of fruit boots I ever had running through Miles Canyon Creek, jumping over brambles that scratched the shit out of me and left my legs looking like I’d shaved for the first time and done one hell of a bad job. Nearly fell and broke my neck every time, especially when ole Horace was shaking his fist at me. Mean old man Horace “Toothless” Mooney. Goddamn son of a bitch almost caught me too. But I could outrun that skinny old man same way I could run circles around Tommy, my slower-than-molasses-coming-out-of-a-jar brother. Shit, for a girl, I could run one hell of an eight-minute mile.

Tommy and me were always getting caught stuffing old man Mooney’s meat jerkys into our back pockets. Only time I ever had a well-done piece of meat back then is when I picked a jerky right out of Mooney’s display. Hell, he used to have a whole jar of them sitting on the counter of Mooney’s Market. He had boxes of the damn things in his back room. Seems he could have spared a couple for Tommy and me.

“If I catch you two looting my jerkys again, I’ll string you up by your feet and hang you over the sinkhole by Cratson’s Corners. You hear me?” old man Mooney would call out.

“I’m addicted to jerkys.” I’d giggle and try to intercept Mr. Mooney as he made his way after Tommy. Poor Tommy would slide into the magazine rack and scoop up all Mama’s favorites.

“We’re good for it, Mr. Mooney,” I’d say as I ran backward and zigzagged a bit so he couldn’t catch me. “You have more jerkys than you need.”

Mooney would be out there on the street shaking his fist, his face as red as Mama’s nails. I still get a kick thinking back on it. Old man Mooney would come hollering to my daddy after he’d caught me and Tommy with our hands in his jerky jar.

“Your kids are up to no good again, Tim Place.”

Mooney’s lips were as thin as thread and whenever he came by to complain his lips would disappear altogether. But Daddy never paid him any mind. He knew how much me and Tommy loved our meat jerkys. And besides, Mooney needed my daddy ’cause he was the best damn mechanic in all of Hamilton County. Mooney drove a piece of junk that wound up breaking down every other damn week. Mooney would huff and puff and then he’d say, “You keep your kids away from my jerkys, you hear me, Tim Place?” And my daddy would say, “Yeah, yeah, Horace. I’ll make ya a promise. I’ll tan their hides for it. Sure enough.” And that would appease the old bastard, and he’d go off in his jalopy. My daddy would crank his spark plugs for nothing but a quarter the next time he pulled up in that hunk of tin he called “a classic.” A classic piece of shit, that’s what I called it.

Eventually, we outgrew stealing Mooney’s jerkys. Tommy went his own way once he discovered that girls thought he was hotter than fire. But by that time I had me my own distractions — more boyfriends than I even wanted — and not a damn one of those boys were worth any exploration of my secret garden. I guess that was because I had had me more lessons than I needed in deviant male behavior so I didn’t think I’d be fooling with anyone anytime soon. My granddaddy chased me around my bed more times than I like to recall. Then there was my encounter with Jeb Oates. I don’t like to think about that night either, but some things don’t ever become the memories too far gone to reach. It’s hard to forget when a good day turns bad. I was eighteen then, just turned, and I had graduated high school only weeks earlier. I started working in my daddy’s mechanic shop to earn some money, but Mama made short work of that. She didn’t like her baby girl covered in grease. She insisted I get myself something better suited to a lady. Hell, I liked working on those old cars but Mama put her foot down. So I found myself a job at Graves Motel on Highway 75. I was going to be waiting tables and taking tips from all those cheating sons of bitches who pretended to be on business trips but were really out there grabbing ass.

It was supposed to be my first night on the job, but it turned out to be the night I learned that things never turn out the way you would have expected them to. I was excited to be earning my own money, even though I knew Mama had an ulterior motive for my loose change. I was nervous that night, though I certainly knew how to carry a tray and pour coffee, but working for strangers wouldn’t be at all like having Daddy’s greasy fingers showing me how to check oil or change a fan belt.

Some people say luck is in the stars? Well, if that’s the case, I should have checked out the sky that night. If I remember correctly, there wasn’t a damn star out.

“My car is acting forlornly, Daddy,” I’d said earlier that day, not wanting anything to go wrong with my new job. You might say I probably had a premonition.

“The car is fine, sweetheart. I tuned her up myself.” Daddy grinned and pinched my chin with his dirty oil fingers.

Wouldn’t you know, the damn car had a coronary that night right before I even got on to the highway. It sounded as dead to me as some old back-road graveyard. There I sat, stranded at a stop light on County Route 3, having myself an anxiety attack. Then, out of the blue, I hear all these honks and hollers, and when I looked up, there was Jeb Oates coming to my rescue. Jeb Oates was the town creep, whistling at girls as though he didn’t have a wife up in the mountains living in one of those House Beautiful abodes with shutters on the windows and fake stone pigs on the lawn.

“What you doing out here on the road, pretty woman?” Jeb asked as he pulled up alongside me and rolled down his window.

“Well, don’t you fret,” he said as he got out of his Thunderbird and walked over. “Smells like a rabbit died in here.” He grinned as he leaned in.

I glared at him. “That’s my car deodorizer. You going to help me or not? My battery is probably dead, and I can’t leave it here in the middle of the street.”

Jeb Oates was the very last person I would have wanted to be on a road with needing his assistance and feeling beholden to be as polite as possible. In better times, I would have told him to take a swim in the Everglades.

“Jimmy John,” he called. “Come on out here and help me move this antique off the road.”

I stepped out of my car as Jimmy John approached. I stood off to the side watching Jeb watch me. It was getting real dark outside, and there was hardly any traffic. Mostly, everybody was where they needed to be, but the son of a bitch had those eagle eyes and he saw me clear as spring water.

2 thoughts on “Dancing Backward in Paradise by Vera Jane Cook‏”