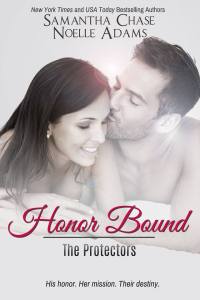 My life was just like any other girl’s until the Maxwell corporate empire ruined my family and stole my future. I’d given up hoping to see justice done, but then the way to right this wrong was dropped in my lap. My job with an event planner can get me into the home of one of Maxwell’s business partners. I can find evidence of what they did to my father. I can make sure they pay. I wasn’t expecting Sebastian. Sebastian has been hired for security, but he is also the son of the man I despise. I should hate Sebastian purely on principle. I shouldn’t care that he’s sweet and funny and sexy as hell. He’ll always be a Maxwell, and that means he’s my enemy.

I can’t help but want him anyway.

He seems to want me too, but only for a good time. He’s the son of privilege, and he’ll never be serious about me. He’ll also never betray his family. If he finds out what I’m really doing here, he’ll turn on me in an instant. He’ll keep me from finding justice.

It’s just that I keep finding him instead.

Excerpt
Rolling her eyes, I could tell she wanted to tell me to go to hell. She didn’t, though. Those dark eyes narrowed. “Look, I have things to do, so I’d better get to them.” She turned to walk away, but I couldn’t let her.

“Ali…wait.” Only, I was the one who was waiting. Waiting for her to turn around, and it felt like a lifetime before she did. When she finally faced me, I decided to just be straight with her. “What’s going on here? If I did something wrong, something that offended you, then I’m sorry. I thought that we had been getting along great, and now you seem like you’re pissed at me and I’d like to know why.” I kept my tone soft. I didn’t want to scare her off.

Okay, maybe I did. A little. That tactic—the one where I get really loud and curse—that worked with the guys. I didn’t think it would go over so well here. “Seriously, what gives?”

Her arms, which had been crossed, suddenly dropped her to sides. “I really don’t have time for this, Mr. Maxwell.” She said it with a curl of her lip that piqued my curiosity.

“Mr. Maxwell?” I was thoroughly confused. “Since when did I become Mr. Maxwell? That’s my father, not me. C’mon, Ali. For two weeks, we’ve been joking and having fun, and now suddenly I’m Mr. Maxwell?”

This time, I did grab her, and I pulled her in close. Her notepad and measuring tape dropped to the floor, and her big brown eyes grew impossibly huge as she looked up at me. Good. At least she was finally looking at me. “Is that what this is about? You’re upset because I teased you?”

She wiggled to get out of my arms, but all it did was serve to inflame me. She felt good. Really good. “Ali,” I warned through clenched teeth.

“Let me go. I have a job to do. Some of us really have to work for a living.”

What the hell? “What is that supposed to mean?”

“I need to get back to work,” she said and pulled against my grip.

“Not a chance,” I said in a voice so low that I almost didn’t recognize it. “Not until you tell me why you’ve suddenly decided that we aren’t friends.”

She stopped moving so suddenly that I almost let her go. Where there had been rage a second ago, there was now confusion. “Friends?” she said incredulously. “We aren’t friends. We were never friends. We are two people who happen to be working at the same place. That’s it.” With a surprise move, she jerked free of my arms and stumbled back until she hit the wall behind her. It was the first time I realized that we were still standing in the small hallway that divided the two master closets.

Her hand came up and rubbed the spot on the back of her head that hit the wall. The accusing look she gave me was enough to make me feel like crap. “Ali…I’m sorry. I didn’t realize you were going to pull away like that. Are you all right?” I stepped forward to see for myself if she was okay.

“Just…don’t, okay?” she said with disgust. “You’ve done enough. I don’t need you checking on me.” She bent down carefully and picked up her belongings. “Just…leave me alone, okay?” Disgust was replaced with something sad and lost, and it was killing me.

It was now or never. “I don’t think I can do that,” I told her, speaking only the truth.

“Why? Because you Maxwells don’t like being told what to do?” There was the fire again. I knew she was trying to provoke me, but she didn’t realize that she had hit the number one hot button with me.

About Noelle Adams: Noelle handwrote her first romance novel in a spiral-bound notebook when she was twelve, and she hasn’t stopped writing since. She has lived in eight different states and currently resides in Virginia, where she teaches English, reads any book she can get her hands on, and offers tribute to a very spoiled cocker spaniel.

She loves travel, art, history, and ice cream. After spending far too many years of her life in graduate school, she has decided to reorient her priorities and focus on writing contemporary romances.

About Samantha Chase: Contemporary romance writer Samantha Chase released her debut novel, Jordan’s Return, in November 2011. Although she waited until she was in her 40’s to publish for the first time, writing has been a lifelong passion. Her motivation to take that step was her students: teaching creative writing to elementary age students all the way up through high school and encouraging those students to follow their writing dreams gave Samantha the confidence to take that step as well.

Her second book, a holiday novella titled “The Christmas Cottage” hit #10 on Amazon’s Best Seller List on Christmas Eve. It was a great Christmas gift! Watching the numbers rise and fall is a daily roller coaster ride but definitely an exciting one! And on February 25th, she released the follow up novella – “Ever After” – available exclusively on Amazon.

When she’s not working on a new story, she spends her time reading contemporary romances, blogging, playing way too many games of Scrabble on Facebook and spending time with her husband of 23 years and their two sons in North Carolina.

Duty Bound is on sale for $.99, in celebration of the release of Honor Bound. Make sure you pick it up, if you haven’t already! 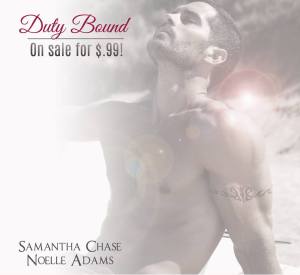 I used to think I could be a hero, but one deadly night destroyed that delusion. So I’ve come home defeated. My military career, my best friend, my purpose—all of it is lost.

What I find is her.

She’s my best friend’s sister, and she’s everything I shouldn’t want. She’s on a hopeless quest for answers about her brother’s death, but those are secrets that can never come to light. She’s always been a fighter, and she desperately wants the truth.

I desperately want her.

Someone is trying to kill her now, and she won’t let me keep her safe. I have to do it anyway, even if she doesn’t trust me, even if she hates me for it. A man protects what’s precious to him, whether or not he can ever claim her for his own. So she becomes my purpose.

I’ll become a hero for her.