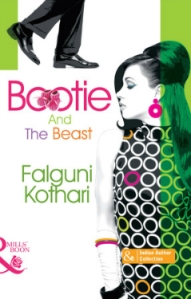 Fairytales don’t end with True Love’s Kiss, they begin with one…

Diya Mathur (aka Beauty), celebrated supermodel and Party Princess of India, is adored by everyone. She works hard, plays hard, and has the biggest shoe fetish on the planet. But after she purchases one baby bootie, Diya’s reputation is in ruins. There’s only one place to escape the rumours – Texas, under the protection of her lifelong friend, and secret love, Krish Menon (aka the Beast).

Financial whizz-kid, CFO and entrepreneur, Krish is a brooding workaholic with a charisma that still brings Beauty Mathur to her knees. He has no idea, of course! They’ve shared a bond since childhood – a special friendship that thrives on sparring, teasing and goading – but with Diya back in his life and under his roof, Krish’s latent desire for her explodes. And when he finally admits to the secret that has never allowed him to commit to any woman – especially Diya – everything changes. Krish might finally realise how much he wants his Beauty. But he won’t get her until Diya has tamed her Beast. 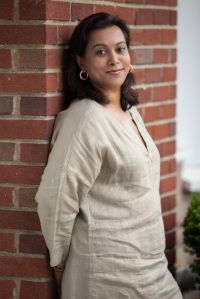 Falguni Kothari is a non-traditional homemaker who accidently tripped on a misplaced soccer ball and fell down the writer’s rabbit hole. Having no more experience with the whole writing/publishing shebang than being a voracious reader and movie buff, it more than surprised her that she could, in fact, write a full-length novel.

Now, several manuscripts down, when she is not trying to find a way out of her many domestic duties or cajoling her Latin dance coach to compose a rumba on Bollywood music, she is found embroiled in some or other scandal—sorry, creating stories—on her ever-faithful laptop.

She’s authored Bootie and the Beast, It’s Your Move, Wordfreak! and Scrabbulous Impressions, a short story. She rumbas across a whole smorgasbord of Social Media daily and loves to connect with most living things.

1. How did you come up with the idea for your current story?

Hey Elizabeth, thanks for interviewing me on your blog. And to answer the question, I love fairytales. And, Bootie and the Beast is, as the title suggests, a modern-day retelling of the classic tale. I honestly don’t remember “coming up” with the idea of the story, it was just there at the back of my mind while writing my debut romance It’s Your Move, Wordfreak! Diya Mathur, the heroine of B and the B, practically jived off the pages of Wordfreak, even thought she was a secondary character, and begged to be written about. She was the perfect foil for Wordfreak’s no-nonsense heroine with her flamboyance, flirting and obsession with all things fairytale. It followed that she’d need a Beast to tame (err…still unsure which one of them needs the taming) and Krish Menon, who also makes a cameo appearance in Wordfreak as the heroine’s brother, auditioned for the position…and—applause—got the job.

2. Tell us about your writing process. Do you outline, or are you more of a seat of your pants type of a writer?

I’m both, depending on the story. I didn’t outline either Wordfreak or the Beast, letting the plot develop as each chapter was written. I wrote both stories in a linear, chapter-by-chapter fashion. But I’ve written an urban fantasy since, which I’m planning (hoping) will be the first book in a series and that story (and series) I had to outline in some detail as its plot is slightly more complicated and has several POVs incorporated in it. My current WIP has also been loosely outlined, as it’s not a simple love story and will deal with many social issues such as death, disease, racism, religious snobbery etc.

3. What is your favorite scene in the book? Why?

I have many, many favorite scenes, but if I have to pick one then it’s the scene where Diya’s cooking Thai food and Krish’s mouth is watering with the garlicky aromas. I love the domestic and intimate feel of the scene, the engaging banter they share, the casual mocking/teasing between friends. No matter what happened…or didn’t happen…in the past, this scene shows everything that is right and wrong between them.

4. What is your most interesting writing quirk?

I write in bed, in my pajamas with my dog by my side, most often just after midnight. I understand its not a quirky quirk but come on! Who gets to go to work in bed and in their PJs? I mean I have the best job in the world.

5. What is the highest goal that you desire to meet as an author?

That my writing be loved and appreciated long after me. That through it, I can make a difference in someone’s—even one person’s—life. I want to make people smile and think. I understand that a lot of people will say that romance novels aren’t the way for those goals and I say they’re wrong. While it’s a writer’s responsibility to entertain and inform his or her reader, it’s the reader’s responsibility to appreciate the story and look beyond its surface.

6. Who is the one author that you would love to meet someday and why?

Well, all the authors that I love, and who are alive and kicking, I have had the fortune to meet at various author and publishing events over the last few years. The ones that have already gone—like Shakespeare, Chaucer and Jane Austen—I hope to meet in another life. I would love to meet J. K. Rowling even if I’ve not read the Harry Potter series. I have watched and enjoyed all the movies though. Oh, and I think I’d like to meet George R. R. Martin if only to beg him to stop killing off perfectly nasty villains. I mean (spoiler alert) with Joffery dead, whom am I supposed to loathe now?

Trekking up the Lower Himalayas. The only thing that bothers me here (and the reason I balk at doing it) is that I’ll have to rough it out and “camp” in the outdoors. I’m not an outdoorsy sort of person and get nightmares at the thought of digging my own latrine. Oh the horror.

And, I want to get a tattoo…quite desperately. What stops me getting one is this hideous image of said tattoo all wrinkled and disgusting in a couple of decades.

8. Tell us three fun facts about yourself.

One: I once had purple hair and six piercings per ear. Two: I am a semi-professional Ballroom and Kathak dancer. Three: I’m totally fan-girly about SRK, Tom Hiddleston and Jamie Fraser. (Yes, my family can’t stop making fun of me for that.)

9. What do you have in store next for your readers?

My next two projects are slightly different from my two previous works. One is the first book in an urban fantasy series—an adventure-packed fantasy-fest of Gods and demons and that awesome thing that makes a human a hero. That epic was a blast to write and I have hopes that I can soon bring my readers some news as to when it might be published. What I’m working on now (LUHU, for short) can be described as an adult version of The Fault In Our Stars by John Green…maybe. Sort of. Oh my God. TFIOS is such a great book! Read it if you haven’t, People.

Dear Readers, words are a gift exclusive to humans. Therefore, it is our responsibility to use them well.

Book links for Bootie and the Beast: