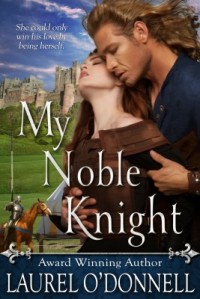 Layne Fletcher, the only girl in a family of three boys, has grown up learning to use a sword and joust, but she is not a knight. She and her brothers have been traveling from tourney to tourney to make enough coin to buy their own farm to shelter their ailing father. When her brother is found unconscious, Layne takes his place on the jousting field against…

Griffin Wolfe, the undefeated jousting champion. When he is unhorsed by a slip of a woman who is not a knight, he demands retribution. His honor will not allow him to let a woman be thrown in the dungeon and he has no choice but to pay her fine, ordering her to travel with him until her brothers can repay him. He attempts to educate her in the art of being a woman, but finds he is attracted to her exciting personality and uncommon beauty despite her less then lady like ways.

But someone is trying to sabotage Griffin. Can Layne and Griffin discover who the culprit is while keeping their families safe and their growing attraction secret?

Enter the Rafflecopter giveaway for a 6″ Kindle!

The horses kicked up dust in the field as they rushed forward. The riders sat low in their saddles. Rou’s garish red feather flattened in the rush of wind.

Layne studied Rou’s form. She groaned inwardly, wondering how he had ever managed to make it this far in the tournament. His form was atrocious. He couched the lance with his hand resting on his leg which bounced at every step his horse took. How could he possibly make a solid strike with such terrible technique?

Layne’s gaze shifted to his opponent. Sir Griffin Wolfe. She had crashed into him in her hurry to get to the open spot in the shade. He had been nothing like she expected. After hearing all the grand tales of his glorious victories, she thought he would be snobbish and arrogant. After all, he had never been beaten in tournament. But he wasn’t. He had smiled at her. Which was more than most of the other knights had ever done to her.

She watched Griffin ride his steed down the field of honor. His form was impeccable. His armor was spotless and immaculate. He wore no flamboyant colors or feathers. He needed none of those to announce his presence. Everyone knew him. Everyone.

The horses thundered towards each other. Remarkably, at the last moment, Rou lifted his lance and aimed it correctly. The lances struck. Each delivered a solid blow to their opponent. Rou’s lance splintered, the shards flying out over the field.

Griffin’s lance held, lifting Rou up and out of the saddle. He was suspended over the earth for a long moment at the end of Griffin’s lance before he fell heavily to the ground, an explosion of dust erupting all around him.

Layne grimaced. That was going to hurt.

A hush fell over the spectators.

Someone tugged on her arm, but she couldn’t bring herself to look away from the fallen knight. Moments ticked by and Rou didn’t stand. Layne craned her neck to watch as the dust settled around him. She hoped he wasn’t too hurt. She would not wish that on any knight. Defeat, yes. Crippling pain, no.

The tugging persisted at her arm. She finally looked down to see her younger brother, Michael. She swept him with a cursory glance. His moppy brown hair fell into his eyes and over his dirt smudged cheeks. “Better go wash your face or Colin will twist your ears.”

She looked back at the field. Rou still had not stirred. His squire raced onto the field of honor.

Layne scowled and looked at him. For the first time, she saw the intent look on Michael’s face and realized something was wrong. She stepped away from the fence, scanning the surrounding crowd behind Michael for her older brother. “Where’s Frances?”

With a wave of his hand, Michael signaled for her to come with him.

Layne glanced about and saw a woman holding a baby watching them. A man leaning over the fence swiveled his head to look at them. Layne followed Michael away from the crowd.

Michael stopped when they were out of earshot. “Laynie,” he whispered. “Frances is unconscious.”

Michael shook his head. “He was practicing with the quintain and it spun and hit him in the head. He fell from the horse.”

She threw the flap aside and entered.

Colin, her oldest brother, sat beside Frances who was prone on his mat. He was not moving. Colin didn’t even look up as she entered. He shook his brother’s shoulders, calling, “Frances. Frances, wake up.”

Michael entered the tent behind her.

Colin looked at Layne. There was helplessness in his gaze and he shook his head. “We’re going to have to forfeit.”

“We can’t,” Layne whispered. “We need the winning pouch.”

Colin spread out his hands. “Look at him! He’s out. He’s not jousting anytime soon.”

Or did they? A tingle of excitement shot up her spine. She grabbed Michael’s arm and backed out of the tent, pulling the young boy with her. “Help me.”

“Help me get into the armor.”

Laurel O’Donnell has won numerous awards for her works, including the Holt Medallion for A Knight of Honor, the Happily Ever After contest for Angel’s Assassin, and the Indiana’s Golden Opportunity contest for Immortal Death. The Angel and the Prince was nominated by the Romance Writers of America for their prestigious Golden Heart award. O’Donnell lives in Illinois with her four cherished children, her beloved husband and her five cats. She finds precious time every day to escape into the medieval world and bring her characters to life in her writing.