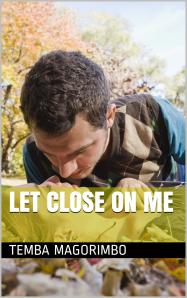 Today I’m welcoming Temba Magorimbo, author of Let Close On Me. Thank you for stopping by, Temba!

Let Close On Me

Imagine that you are a male Caucasian growing up in war torn Rhodesia. You wonder if your father will survive each army posting as both you and him now count the dead amongst friends, relatives and neighbours. You see the beaten look in his eyes as he returns after each posting. The African wave of independence is on the run. Nationalism is the go word. The former colonies have taken up arms against the government headed by your kith and kin. The country is in flames. Your father’s armoured personnel carrier hits a landmine. He and his troop jump out, straight into a deadly booby trap of anti personnel mines. Two years after the war ended your father dies of his war wounds. Imagine that you later become a journalist, when part of a former guerrilla army starts riding shotgun against the state, how would you react now that you can read, write and speak two of the major languages? You walk a tight rope as you report the bare facts on the ground. A whole tribe has risen against its brethren and shots are being fired. As the government moves in the army to quell the rebellion, atrocities are what you report on. The government loves to hate you. They would give everything to silence you. Your star rises, and rises and rises and then ………Imagine that years later you fall from grace. Beer, women and intransigence knocked you down. You got sucked and flashed out into the sewer pipe by your newspaper, girl, friends and society. Will you ever return to the lime lights or the pedestal?

Temba Magorimbo was born on 09 August 1966, Tuesday in the then Rhodesia (now Zimbabwe) in Gwelo (then) now Gweru. His father was a British South Africa Police (BSAP) constable from 1960 to 1977 while his mother was a housewife. He grew up circulating Gwelo’s police camps like Mkoba, Mutapa, Old Camp and Monomutapa as the family moved residences until he started school in 1973 at Bumburwi Primary in Mkoba for a term. The family moved to Senga from 2nd term 1973 until he concluded his primary education in 1979. He did his high school briefly (two weeks) at Nashville High in Gweru before moving to Ascot in 1980 until 1983. He is currently married to Itayi with whom they have two daughters. He is a government bursar since 1989. His printed works are on CreateSpace® and kindle are available from AmazonKDP®. Sample fiction can be accessed free from wattpad and timbooktu

Picture 1977-79 when I was between eleven and thirteen years old. I would listen misty eyed to radio stories beaming out of the Rhodesia Broadcasting Corporation radios meant for kids, [radio lessons] which began with grades 1 and ended at grades 7 every day. Teachers shuffled in between classes passing handsets after each grade’s lessons were over. Those stories mystified me. Then we had the library time were we were to select books, read and talk about what we had read. That was when I decided that I wanted to be a writer, first I tried mysteries before coming to contemporary romance.

I think I have the creative streak in me. Even when I try to ‘hang up the boots’ I still find myself recreating simple letters or whatever I will have copied from the internet. Ideas just keep coming.

3. How did you come with the idea for your current story?

Let Close On Me came about as an idea of what would happen if there was a Caucasian man who drank and smoked a lot, who liked and spoilt his ladies refraining from the marital side and who had connections with the previous Rhodesian government administration in a country which is highly politicized against the former Caucasian masters. In delving further in, I created the novel, Let Close On Me about David Jonathan Steele and his escapades.

4. Tell us about your writing process. Do you outline, or are you more of a seat of your pants type of a writer?

I outline and create plots and sub-plots. Then I even create what will happen in which chapter. I end up with a list of characters, their ages, their names, type of occupation, family line, residential and characters/appearances. Who wants Uncle John looking the same as Richard the main character?

5. What is your favorite scene in the book? Why?

I like the scene where Jonathan is in London having a host of interviews because that is what every writer wants. I like it when he earns his advances well ahead of time. That is every writer’s pipedream. Then he is asked questions that every African who leaves his country and its politics find hard to answer back because his answers may see him having a welcome reception at the airport on his way back accused of this and that crime. He is in a love dilemma yet opportunities start presenting themselves 8, 257-km (5, 167 miles).

6. Who is the one author that you would love to meet someday and why?

Wilbur Smith. The reason is he is an African hero. He is known the world over also he sort of portrays the African tourism market with his description of wildlife and other African terrain. He describes the Namib Desert and its Etosha Pan which makes one wonder.

7. What is the best piece of advice you would give to someone that wants to get into writing?

Before you even put pen on paper as it where, first research the market and genre you would like to write in. After that set aside a budget for editing, book jacket cover and paid advertising or marketing. The real work for a writer is in marketing more than in the actual writing. The royalties are rare and they only come far in between. Seriously, though it adds to your performance, don’t do drugs!

Connect with the Temba Magorimbo