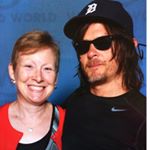 My family had a bit of fun yesterday. We went to Wizard World Comic Con in Chicago. My youngest daughter is a huge Norman Reedus fan (Daryl in The Walking Dead) to the point that she has a life size cut out of the man in her bedroom. (It freaks me out every time I walk in there.) So we bought our tickets for a photo and autograph session, and left the house at 5 am.

I was a bit nervous for her to meet her obsession. Reality rarely lives up to fantasy. When I was about her age, a girlfriend and I followed a cover band around for a summer as they played various festivals. We met the lead singer after one show, and I was so disappointed in how arrogant he was. (Did I mention it was a COVER band? The dude didn’t even sing his own songs.) Then in my early twenties, I met the local NFL quarterback. I wasn’t impressed with him either. So I worried that I was setting her up to have her heart crushed by some disinterested actor.

Here he is with my youngest. I guess he is known for doing things with his tongue – like licking people. She was so thrilled. And as I watched some of the other 500 fans leave our photo session, some wiped away tears. We do get emotionally involved with these characters, and thankfully, the actors understand our obsession with them.

My daughter is an artist and gave Norman a picture she drew of his cat wearing Daryl’s trademark vest complete with angel’s wings. He praised it and gave her a hug during the autograph session. 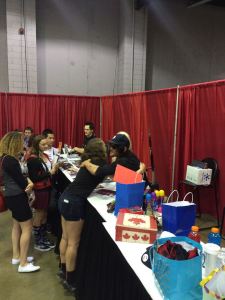 Numerous people gave him gifts and he took the time to open each one and comment on it. I noticed during both the photo and autograph session that he made it a point to say something to each person.

Then, as we were looking at the vendors, Michael Rooker (Meryl on The Walking Dead) passed us. My daughter took off after him to ask for a picture. They walked arm and arm for several moments and then she took what he called a “walkie” – a walking selfie. (Meanwhile, I was running after them yelling “She’s underage! She’s underage!) He was so cool to do that considering a photo session goes for around $100 a pop. 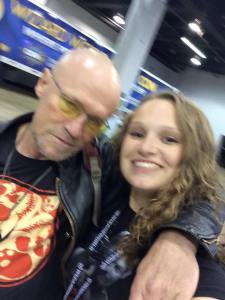 Then we scouted the other autograph sessions and my daughter was able to take this picture of Captain Tight Pants (Nathan Fillion) before we were shooed away. Hard to believe he is actually better looking in person! 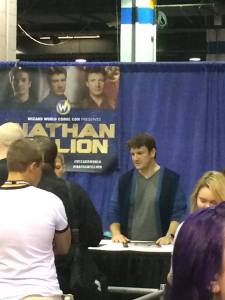 Next year, we will try for a Supernatural Comic Con to feed my oldest daughter’s obsession (and mine too!). I know the actors get paid a boat load of money to do these shows, but I do appreciate them being friendly to us fangirls.

Did you ever meet someone famous? Were you thrilled or disappointed? Leave a comment and tell me all about it!

3 thoughts on “Comic Con in Chicago with Norman Reedus”