Blaze Knight has been through hell and back, but the nightmares aren’t over yet.

Five years after Blaze was maimed by Cyrus Chimola, a powerful vampire with a penchant for torture, he’s still trying to pick up the pieces of his shattered life. As a genetically engineered mercenary with the ability to bend fire to his will and to see in infrared, Blaze’s mission is to protect what’s left of humanity. When Chimola and his crew return to the Bronx gunning for Blaze’s blood, Blaze is forced to face the demons of his past. Hell-bent on revenge, he seeks the help of Valerie Medeiros, an NYPD detective who manages to steal his heart and save his life in more ways than one.

Motivated by her sister’s gruesome death, Valerie has made it her life’s goal to bury every vampire in the ground where they belong. When she brings in Blaze Knight for suspected murder, she discovers he’s not only innocent, he isn’t a man at all—he’s a half-vampire hybrid working with a band of brothers for the U.S. military. Valerie has a hard time trusting anything with fangs, yet she quickly falls headlong into Blaze’s life, a life full of darkness and horror she can’t even begin to fathom. The bodies are stacking up, but Valerie can’t seem to let go of this hybrid, a beautiful monster filled with pain, rage, and passion unlike anything she’s ever known.

In a world where the line between good and evil is blurred, Blaze and Valerie will find danger at every turn, risking everything they’ve come to know and love, including one another.

Valerie kept her eyes locked on the glass windows covered with cigarette prices and beer ads, watching Tattoos pay up at the cash register. Once she reached the side of the building, she pressed her back against the warm brick wall. Sweat trickled down her spine and she wiped her clammy hands on her jeans before she drew her Beretta. She listened for the bell hanging above the store entrance, and when it jingled, she peered past the corner of the building.

Holding a pack of Marlboros, he slipped it into his back pocket along with a silver money clip. He walked back toward the Chevelle, scanning the area one more time as he stepped off the concrete elevation.

With her gun pointed at the ground in a two-handed grip, Valerie pushed off the wall and turned the corner, staring at his back. Her voice was loud and clear as she called, “Blaze.”

He stopped and pivoted around. A fleeting expression of confusion filled his face, but it quickly turned into shock as she lifted her gun and shouted, “Freeze, NYPD!”

Gasps and shouts resounded as everyone turned their attention on her. Some people ducked while others gawked, and she wished they would just climb into their cars and get the hell out of here. She did her best to ignore them, keeping her focus solely on the man before her as she carefully approached him. He didn’t make any sudden movements, his brow furrowing as a muscle in his jaw ticked.

Valerie flashed her badge to prove she wasn’t bullshitting. “Get your hands in the air where I can see them.”

He slowly lifted his arms and spread his hands out wide. Then spoke with a voice like black gravel, matching his appearance all too well. “What’s going on here?”

She closed in on him, his presence becoming more and more overwhelming. Sirens resonated in the distance, sending a trickle of relief through her. He didn’t appear armed but that didn’t mean jack.

“Turn around and get down on the ground. Now!”

Anger consumed the confusion on his face but he surprisingly complied, giving her his back again before dropping to his knees with his hands above his head.

She kept her gun aimed and her mind submerged in the well of her calm. She couldn’t remember the last time she’d arrested someone; she usually shot to kill. “Cross your ankles,” she ordered, and he did so, crossing his booted ankles as if he’d done this before.

Valerie placed her foot in the space between his legs, so if he attempted to stand he would end up flat on his face. People finally backed away as she removed her tungsten carbide handcuffs from her utility belt, gripping the Beretta with knuckles white as chalk. Tungsten carbide was the only metal strong enough to hold a vampire, but she used it on everyone, regardless of species. Two New Rochelle cruisers whipped into the gas station, blocking off both exits before four officers leapt out of their respective vehicles. Valerie put the gun up and cuffed Blaze’s dominant hand, swinging his right arm around before latching onto the left.

He didn’t put up a fight. He didn’t even flinch. But he balled his big hands into fists at his back. She read him his Miranda rights as she cinched the cuffs around both of his thick wrists.

“You have the right to remain silent—”

“I have the right to know what’s going on,” he growled, showing her his savage profile.

“Anything you do or say can be used against you in a court of law.”

“What are you arresting me for?”

“You have the right to an attorney.”

She yanked the chain of his cuffs, bringing his solid body against her as the faint scent of cologne tickled her nose. She leaned into his ear, anger flashing through her as she thought of bloody grass and charred flesh.

“You’re under arrest for the murder of Elena Delgado. Now get the fuck up and move.” 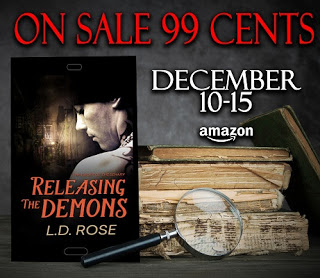 L.D. Rose is a neurotic physician by day, crazed writer by night, and all around wannabe superhero. She writes paranormal romance and urban fantasy, but she’s been known to delve into horror, sci-fi, and medical suspense on occasion. L.D. Rose is a member of the RWA, FF&P, NEC-RWA and CoLoNY. She currently lives in Rhode Island with her studly hubby, her hyperactive boxer, and her two devious cats.