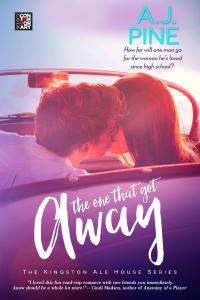 The One That Got Away
by AJ Pine
The Kingston Ale House, #1
Publication Date: April 18, 2016
Genres: Adult, Contemporary Romance, Entangled Select Contemporary

Synopsis: How far will one man go for the woman he’s loved since high school?

Jamie Kingston has been Brynn Chandler’s best friend since middle school. Only once was their friendship tested—when Brynn gave Jamie a single kiss. Since then, they’ve had an unspoken agreement never to cross that line again, and she’s ready to let go of the past and move on.

But Jamie has loved Brynn for as long as he can remember, and now that he’s ready to tell her, she has her sights set on someone else. Knowing this is his last chance, he asks Brynn to go on a two-week road trip. But their time alone brings old hurts to the surface, and Brynn has to decide if the one that got away lies at the end of the journey or if he’s been by her side all along.

She touched him, gently this time, a hand on his chest. And though his shirt was damp and cold, heat radiated from her palm and through his veins. How had he ever thought he

could be okay with just her friendship? And what would he do now if he lost it? He’d lose her forever.

Right now, though, in this room and with the magic that was Amarillo and tequila and lucky bouquets, she was his.

“Maybe you should kiss it and make it better.” He touched his chin again, and his fingers came away clean.

Brynn mirrored his action, but her skin was like satin compared to his own rough touch. And the heat, again he felt it from the pit of his stomach to the nerve endings in his fingers and toes. He felt everything when she touched him, and when her lips took the place of her hand, all reason went out the window.

“Like this?” she asked, her voice breathy and sweet and like nothing he’d ever heard from any other woman.

He opened his eyes to watch as, standing on her toes, she peppered his neck with kisses.

He raked his fingers into her hair, and she looked up at him.

“You know we’re going to see each other naked, right?”

Jamie barked out a laugh.

“What if you laugh?” she asked.

“What if I laugh?” she asked, her cheeks growing pink, and shit she was adorable when she was nervous. He took off his shirt, and Brynn sucked in a sharp breath. They’d seen each other at the beach. This wasn’t anything new. And yet it was miles away from the boundaries of friendship.

“You’re not laughing,” he said, and she shook her head.

Her fingers fidgeted with the top button of her shirt, but she couldn’t quite get it open. Jamie’s hands covered hers, steadied them, and they undid the buttons together. She let the open garment fall from her shoulders, and there she stood, the cream lace of her bra against the flushed pink of her otherwise pale skin.

Jamie wasn’t laughing, either. In fact, he had to remind himself to breathe so he had enough oxygen to formulate any sound at all, because her hands moved to the front clasp of her bra, and yep. He still wasn’t breathing.

“What?” she asked, pausing to look at him.

He pulled her hands down to her sides before she completed her task.

“You don’t want me to…” she started, but he shook his head.

“Seventeen-year-old me is out of his mind with how long he’s wanted to touch you like this. He needs a second to collect himself.” 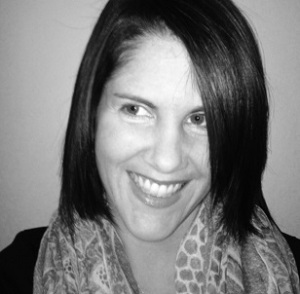 AJ Pine writes stories to break readers’ hearts, but don’t worry—she’ll mend them with a happily ever after. As an English teacher and a librarian, AJ has always surrounded herself with books. All her favorites have one big commonality–romance. Naturally, her books have the same. When she’s not writing, she’s of course reading. Then there’s online shopping (everything from groceries to shoes) and, of course, a tiny bit of TV where she nourishes her undying love of vampires and superheroes. And in the midst of all of this, you’ll also find her hanging with her family in the Chicago burbs.