As the oldest son and heir to Anglesea, it is Roger’s duty to stand tall and strong. But his tough exterior belies the heart of a true romantic, a devoted son who yearns for the deep love he has witnessed between his parents and his sisters and their husbands. However, with the Anglesea family jockeying for a more advantageous position, Roger must marry judiciously.

Having spent her childhood watching her mother suffer, Kathryn of Mandeville is determined never to marry. To be as a Viking shield maiden of old is her heart’s only desire. But when her sister Matty runs away to escape Roger’s sensible proposal, Kathryn is forced to help Roger find a more suitable bride. Bound by duty, Roger and Kathryn soon discover they are facing a much tougher fight—the one that is within their hearts . . . 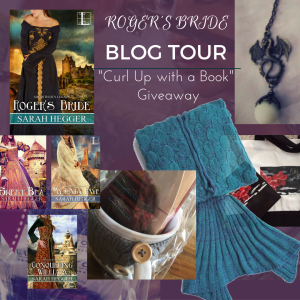 Roger wanted to jab his dagger into his eye. He despised failure, hated it, yet judging by his intended bride’s reaction to his courtship performance, he and failure now shared a bed. Love and war, with a clear plan, a man could manage one in much the same manner as the other. Hadn’t a lifetime under the guiding hand of Sir Arthur of Anglesea set this lesson into Roger’s marrow?

Except, Roger’s courtship had veered from the battle plan.

Lady Mathilda had accepted his flowers with her sweet, lovely smile and even moved her skirts to make place for him beside her. Since then, his plan had moved from disarray into rout. Lady Mathilda should be sighing by now, at least peeping at him from beneath thick dark lashes. He’d watched William turn a woman sweet a hundred times.

In her haste to put distance between them, she inched her curvy hips down the bench, almost tipping onto her pert ass. She pressed a fluttering hand to her throat. “Five sons, Sir Roger?”

“Aye.” He softened his tone. A woman would not enjoy being bellowed at like a man-at-arms. “My mother had four, and the two girls. I wager we could do better.” He gave her a tiny nudge. “Aye?”

Agape, Lady Mathilda shook her head. Her nut-brown hair made a silky swish on the bench.

Too abrupt? Perhaps. He should have refrained from the nudge for certain, but desperation crept through him with each passing moment. “Of course, that is if you are willing, my lady.”

Gentle, his mother had urged. Woo her with sweet words and smiles. Roger smiled.

She stared at him with huge eyes, dark like aged walnut, and gave him her flawless profile.

Mother had chosen well. Lady Mathilda boasted the sort of beauty that would make any man want to strut and crow like a barnyard cock.

“Your lips.” He gave it another try. Please let the spirit of his brother, William, dwell within him now. “Are as ripe as…apples. Red apples, not green. Not the red and green ones either. All red, like…” Jesu, give him strength. Even he could do better than that. “I mean cherries.”

“You are most kind.” Her chest rose and fell with her quickened breathing, and while a man tried not to look, or get caught looking, she filled out the front of her bliaut with a tasty, ripe bounty.

Roger balled his hand into a fist, tempted to punch his own face with it. He made a dog’s ballocks of this. Give him a keep to tear down, a young soldier to train, a horde of marauding Scots. Anything but this.

Still, he’d vowed to marry, and marry he would. Time to do his duty as the heir. At his feet, his favorite bitch peered at him and whined. She understood him, never needed pretty words from him. Why couldn’t women be more like dogs? Only, with not quite so much fur and the bad breath. There must be something they could speak of. He waded into the oozing silence. “Dogs?”

Lady Mathilda clasped her hands in her lap, fingers white about the knuckles. “Dogs, Sir Roger?”