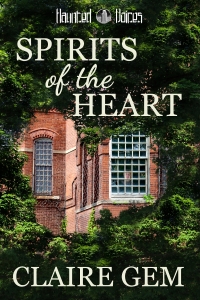 Spirits of the Heart – A Haunted Voices Novel

An addiction counselor and a security guard struggle to free a little girl and her father, two lost spirits trapped inside an abandoned mental asylum.

Addiction counselor Laura Horton returns from college to move in with an old friend and start her career. But her homecoming is jarring. Her friend moves out, leaving Laura alone with the gorgeous but intimidating ex-boyfriend—in a house that snugs up to an ancient graveyard.

Officer Miller Stanford is a man with a shattered past. His alcoholic dad destroyed their family, a weakness Miller is terrified will consume him too. The last thing he needs is a sexy, blonde addiction counselor watching his every move. When he begins to see specters in the dark, he starts questioning his own stability.

But Laura sees her too—a pathetic child-spirit searching for her father. Then Laura starts digging into old asylum records . . . Can Miller and Laura uncover the secrets of Talcott Hall without jeopardizing their love—and lives—in the process?

Laura Horton’s bad feeling began the minute she pulled up in front of Angie’s puke green, two-story house and parked at the curb.

Not Angie’s house, she reminded herself. Angie’s boyfriend’s house. Although they’d been pretty tight in high school, she and Ang had kept in touch mostly via telephone and email these past few years that Laura had been in grad school. Once, a few years ago, they’d gotten together for their five-year reunion, when Laura had come home to visit her ailing dad.

That was the first time she’d seen the compact craftsman bungalow—after dark—and she hadn’t realized it was such an ugly color. She hadn’t met the boyfriend, Miller Stanford, whom Angie either claimed to love with all her heart, or wanted to eviscerate with a Phillips head screwdriver, depending on the day. Nor had Laura noticed then that the house snugged up tight on one side to an ancient-looking graveyard. The only thing separating the two properties was a narrow strip of grass and a dilapidated, iron fence.

A shiver ran across her shoulder blades as she sat in her car, studying her new surroundings. Her new home.

Chillier up here. Where’d I pack that hoodie?

She turned to dig around in one of the boxes squashed into the back of her tiny car, quickly realizing it was pointless. Nearly everything she owned in the world—besides a few pieces of battered, old furniture—filled the back seat, and passenger side, of her thrifty Kia. When she’d run out of room for boxes, she’d resorted to folding softer items, like her sweaters and sweats, into new plastic trash bags. Stuff crammed every nook and crevice in the car, leaving just enough space beneath the headliner for her to see out through the rearview mirror.

There was no way in hell she was locating her hoodie in Mt. Clothesmore.

Rubbing her hands up and down her arms, she climbed out and sprinted up the steps to the front door. She hadn’t been able to reach Angie by phone since she’d left Boone, North Carolina the day before, but that wasn’t too unusual. Her friend was a bit flighty, and prone to misplace her phone, her charger, or both. Angie had been juggling courses at the community college with a full-time night job, tending bar at the pub just down the street, for the past two years. Laura couldn’t blame her for acting a bit squirrelly at times.

She reminded herself how nice it was of Ang and Miller to rent her their spare room. When Laura landed the job in Middletown, her initial exhilaration had been tempered by a glaring question: where the hell was she going to live? There was no way she could move into her father’s tiny condo with his new wife, Deirdre. And securing an apartment on her own was out of the question, at least not until after her first few paychecks hit the bank.

Laura squared her shoulders, which were quaking slightly in the cool spring breeze, tipped up her chin, and rang the doorbell.

Twice. She shifted her sneakered feet against the creaky porch boards, folding her arms against the chill. After another long moment with no answer, she rang the bell a third time, holding down the ancient button a full ten seconds this time. She could hear the electronic buzz through the peeling front door, but no other sounds at all.

Angie had to be here—she knew Laura was coming. It was Friday, but Angie’s last term of college ended last week, and it was nearly two o’clock in the afternoon. There was only one vehicle parked in the short driveway, a late-model Ford pickup. But Laura wasn’t sure what it was Angie was driving these days.

A dull click, then the tinkle of chain skittering on the inside of the wood. The door burst open. But it wasn’t Angie standing on the threshold.

Laura didn’t have time to suppress the involuntary gasp that escaped from her open mouth.

The man was huge, not only tall but massive, with a broad, muscular chest, one lightly furred with golden hair.  His bulbous biceps were cut, sculpted like a Greek statue. And he wasn’t wearing much more than Michelango’s David, with only a steel grey towel snugged around narrow hips to match the steely glint in his blue-grey eyes.

She blinked and swallowed, stumbling back a step. “Is Angie here?” she asked in a small voice.

The giant snorted and crossed his arms over his chest. “Who’s askin’?” 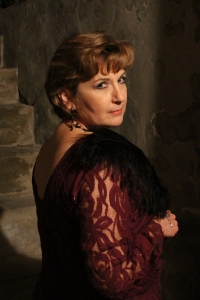 Claire is a multi-published, award winning author of emotional romance—contemporary, paranormal, romantic suspense, and women’s fiction. She writes about strong, resilient women who won’t give up their quest for a happy-ever-after—and the men lucky enough to earn their love. No helpless, hapless heroines here. These spunky ladies redefine romance, on their terms.

Whether it’s a sexy contemporary read you’re seeking, or a thrill ride into the supernatural world of hauntings and ghosts, Claire will take you on a memorable journey.

A New York native, Claire has lived in five of the United States and held a variety of jobs, from waitress to bridal designer to research technician—but loves being an author best. She and her happily-ever-after hero, her husband of 38 years, now live in central Massachusetts.