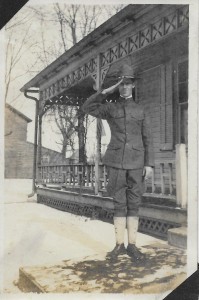 My great uncle Tom Slattery (8/3/1888-2/7/1974) was stationed at Camp Zachary Taylor in Louisville, Kentucky, along with 50,000 other soldiers. Though over the years I have learned about WWI, I didn’t know what was going on stateside during this time until I read Tom’s weekly letters to his family back in Covington, Indiana. He ran a medical ward at the camp’s hospital and did not hold back when describing the illnesses, deaths, and suicides that became part of his daily life.

At thirty years old, he was the tenth child of eleven born to Eliza McCabe (Trim, Ireland) and John Slattery II (Limerick, Ireland). Not all of the children made it to adulthood, including the eleventh son, so Tom was considered the baby of the family. In the family photo, Tom is the boy in the lower right-hand corner.

Tom arrived at the camp in March 1918 and for the first six months, he thought life there was pretty “swell.” He writes about the variety of entertainment available to the soldiers – all for free – and the abundance of food that is making him fat. He expects any day to be sent “over there” (France) along with his friends, but instead, he continues to take care of the sick, earning a few promotions along the way. 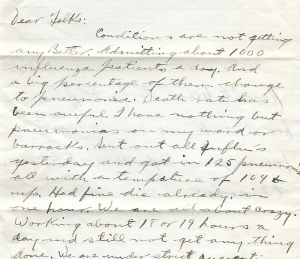 In September/October, the camp was overrun with the 1918 Spanish Flu Pandemic. Suddenly, Tom is comparing the camp to hell.

Well we are sure having a time of it now. The whole camp (it seems) is getting influenza (Spanish type). An epidemic which is in several camps over the country. The Great Lake camp is in quarantine with most of the men sick. It started three days ago and I have been working most all the time since. This is my fourth night on duty and two days. We are about all in and there is no sign of a stop of the stream of patients coming in. Have been admitting better than five hundred every day and today it was 600. We all had to move out of our barracks this morning to give room to them. Made wards out of every available building. We are sleeping in tents (or will when we get a chance). I am Ward Master in a big barracks of four rooms and porches and every inch of them full of bed. Have from 6 to 9 orderlys under me. Have from 175 to 200 patients. Are very short of nurses to since have had to open so many new wards. Everything will be filled up here today and then I don’t know what we will do with them. Hang them on nails I guess.

This is one H-L of a place. Working 24 hours a day and everybody about all in. Admitting about a 1,000 influenzas a day and they are getting pneumonia by the hundreds. 21 died yesterday that was the ones I know of. There is no telling how many more. Every available place has a cot. We are sure having a time taking care of them. I have worked all day and night 2 days this week and to 11 pm every nite. Some Dr haven’t been to bed at all. I am feeling as good as ever though. Just get a little tired. We are quarantined so can’t leave if we wanted to or had time.

Conditions are not getting any better. Admitting about 1000 influenza patients a day. And a big percentage of them change to pneumonia. Death rate has been awful. I have nothing but pneumonia on my ward or barracks. Sent out all Influ’s yesterday and got in 125 pneumonias all with a temperature of 104 and up. Had five die already in one hour. We are all about crazy. Working about 18 or 19 hours a day and still not get any thing done.

It is estimated that 25 million Americans contracted the flu, and it killed 675,000. According to the Camp Zachary Taylor Historical Society, the flu killed 21,000 servicemen in the United States, with 950 of them at Camp Taylor. Approximately 43,000 servicemen died worldwide of the flu.

I inherited Tom’s letters from April 1918 to July 1919. After the war ended in November 1918, he hoped he would be discharged right away, but soon realized, as a member of the medical staff, he would be one of the last to be let go. Unfortunately, I don’t have that final letter from September 1919 where he would have shared the good news with his family, but I do have dozens of other interesting ones. I have transcribed the letters below. If you are a history buff, I hope you find them as fascinating as I did.

If you are interested in seeing the original letters that I scanned and then donated to the Camp Zachary Taylor Historical Society, please click here.

Love stories for everyone from authors you trust.

Main Street Romance is made up of four friends and bestselling authors who adore romance, and are committed to filling your bookshelves with sweet and clean love stories you’ll be excited to share with your best friend, Mom, Grandma, and your teenage daughter, too. No profanity, graphic sex, or violence.

Not only are they dedicated to writing sweet romance and growing their audience with new readers, but they will be building an entire community around the Main Street Romance brand, including giving readers short stories that take place in their very own Main Street Romance world, where new characters along with characters from their prior releases, will appear in stories that take place on Main Street, in Romance, Virginia.

Join them on the front porch for a cool glass of sweet tea, curl up in a cozy chair, and get ready to fall in love with your next favorite read.

Don’t miss out. Be sure to sign up for our newsletter!

If you are interested in featuring the Main Street Romance authors, please contact Lisa Filipe at mainstreetromance@gmail.com.

Addison Cole is the sweet alter ego of New York Times and USA Today bestselling and award-winning author Melissa Foster. She writes fun, flirty, and sweet romance with a dash of heat.

Chris Keniston is a USA Today bestselling author of more than twenty novels known to delight audiences with stories of falling in love, family values, and all around entertaining shenanigans.

Nancy Naigle is a USA Today bestselling author. She whips up small-town love stories with a dash of suspense and a whole lot of heart.

There is no true faith until one follows blindly.

Henry and Elaina Daniels continue to build their relationship, but everything comes crashing down around what stability they have established. Even with the birth of their baby and a journey back north, Henry tumbles further into his sickness.

Gunther Erikkson spends so much time trying to save face, he loses himself in the process. He allows his carnal desires and needs to take over, making a mistake that will change his life forever. Deep down, he feels like he is failing his son, hiding his pain until confronted once again.

Will Gunther learn to live again, finding it in himself to move forward and be the man Quinn taught him to be?

Affected by the chaos across the seas, Erik Carlson, the head scientist in the program, gathers a team and develops a plan to bring Henry back to the facility. However, the cure he’s offering comes with great consequences. With only one chance at survival, Henry must decide whether to make the ultimate sacrifice, hoping to kill his demons once and for all.

Will Henry accept Erik’s offer, risking death in order to save himself and his relationship?

Add the book on Goodreads: http://bit.ly/1Sy2W0m

Usually, Erik portrayed a man mindful of his astuteness, cunning in every way. The trepidation of his plight made him more aware of his twisted ways. He served a purpose while Roger was around because of his lack of morals, his willingness to do what it took for acceptance. Now, with thoughts of remorse in his gut, Erik decided to attempt to do something because he was an integral part in the creation of the undead virus.

The heels of Erik’s loafers echoed in the darkness when he stepped onto the stained concrete floors. He leaned up against the door as it closed, the only sounds being his erratic breathing and the click of the lock. Once he located the light switch, his gaze darted all over the room. It wasn’t as posh as the conference room. There were simple lines, an uncomplicated design scheme…

His gaze paused on the wall-sized, glass front mahogany cabinet filled with every kind of handgun, rifle, or knife one could ever want. It was a blaring reminder of how much his life was at risk.

As the cotton feel overtook his mouth, Erik tried to swallow, but his throat would not work through the dryness. He stalked to the mini refrigerator. Just as he thought about opening it, he changed his mind. He needed to leave everything as it was because Roger would definitely know if there was a bottle of water missing.

Glancing at Roger’s desk, he noted a hunting knife, dried blood all over the long blade, stabbed into the wood’s surface. As quietly as he could, Erik walked around the desk and sat in the chair. The leather softly creaked under his slender frame. Careful not to touch the knife, not knowing if the blood was tainted, he reached for the laptop and pulled it toward him.

The room felt as if it tremored. Confused, Erik gripped the edge of the desk and looked around, concerned about an earthquake. Then he realized it came from within his own body.

“Chuffing hell,” he whispered. Heat bloomed throughout his body, so he unfastened the top button of his shirt.

One thing was certain. Roger put the fear of God in people, and Erik was feeling the pressure.

BIO: Rissa Blakeley is the author of the post-apocalyptic series, Shattered Lives, which also features a paranormal twist. She lives a socially awkward life just outside of Atlanta, Georgia with her amazing husband and daughter, four four-legged, furry children, and the many characters poking her brain, looking for more scenes about them in her books. When she isn’t writing, she can be found procrastinating on social media.