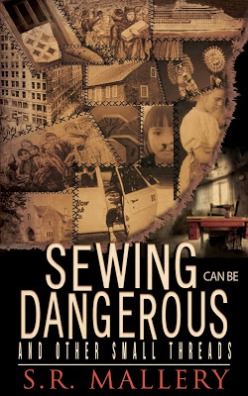 Title and Author: Sewing Can Be Dangerous And Other Small Threads by S.R. Mallery

Blurb:
The eleven long short stories in “Sewing Can Be Dangerous and Other Small Threads” combine history, mystery, action and/or romance, and range from drug trafficking using Guatemalan hand-woven wallets, to an Antebellum U.S. slave using codes in her quilts as a message system to freedom; from an ex-journalist and her Hopi Indian maid solving a cold case together involving Katchina spirits, to a couple hiding Christian passports in a comforter in Nazi Germany; from a wedding quilt curse dating back to the Salem Witchcraft Trials, to a mystery involving a young seamstress in the infamous Triangle Shirtwaist Factory fire; from a 1980’s Romeo and Juliet romance between a rising Wall Street financial ‘star’ and an eclectic fiber artist, to a Haight-Asbury love affair between a professor and a beautiful macramé artist gone horribly askew, just to name a few.

~Excerpt~
An Excerpt from Sewing Can Be Dangerous & Other Small Threads
From A
Drunkard’s Path
“….Are you kidding me?” Deborah exploded. “My life is falling apart! C’mon, curses don’t really happen, do they? I mean, what can I do? You tell me now!” She segued into a screech.
“Come over to my place tomorrow and I’ll try to relate it all to you, I promise…”
….“Do you know anything about the Salem Witchcraft trials?” The older woman leaned in toward her niece, as if casting a spell herself.
“No, not much, why?”
“You remember Martha Stinson from my quilt group? Well after the wedding, she showed me a journal written by a relative of hers and frankly, I am very concerned about you. It seems one of the accused witches from the original Salem trials might have actually had a connection with a real witch, an ancestor of Martha’s…”
* * * *
Inside the packed meetinghouse, dust particles from mud-caked boots floated throughout the air, rendering it dense, murky. That year, April had been an unkind month to Salem Village. Rain-drenched meadows produced a sludge that clung to the edges of women’s dresses, creating odors so foul that in such tight quarters, it became difficult to breathe. But people weren’t concerned with such matters on this day. They had gathered for a higher purpose: the Devil was in Salem, and they wished him thwarted at all costs. Even the constant threat of Indian attacks and surviving harsh winters paled in comparison to what was happening now, in that room, swelling with apprehension.
Crammed into high-walled pews, dark wooden benches, or simply shoved up against walls, spectators filled every conceivable space in the meetinghouse. Donning black hats, cloaks, and breeches, the men angled forward, their eyes boring holes into the five men sitting up front, yet it was the women who carried the greatest burden that day; their hooded coats and muffs covering their recently unkempt hair and unwashed fingernails, couldn’t disguise the uncertainty they felt about their community’s loyalty to them and how it would all end.
Sitting at the head of the counsel table, amongst other magistrates in the newly appointed Court of Oyer and Terminer, John Hathorne and Jonathan Corwin quietly conferred with each other before beginning their first round of questioning. Arrogant, self-important, the black-robed magistrates assumed their positions on the political totem pole, and having been brought to Salem for such a specific purpose, they dared not disappoint. They were on a mission to deliver souls. Hathorne, displaying the greatest exhibition of self-aggrandizement, seemed the most severe. With no real legal experience, and having only glanced at Sir Mathew Hale’s Trial of Witches, and Joseph Granvill’s Collection of Sundry Trials in England, Ireland the week before, he nonetheless believed he was more than competent to interrogate the accused.
At the front of the room facing the magistrates, sat all the accusers, the “afflicted” girls: Abigail Williams, her cousin Betty Parris, Ann Putnam, Sarah Bibber, Sarah Churchill, Elizabeth Booth, Mercy Lewis, Susanna Sheldon, Jemima Rea, Mary Warren, Mary Walcott and Elizabeth Hubbard. With downcast eyes and folded hands, they appeared demure; inwardly they were experiencing emotions quite different from anything they had ever known. Childhoods stocked with adult repression and fear now served as a springboard to the frenzy of accusations they had created, because on this day, along with their catharsis and even exhilaration, came the most important emotion of all: a sense of empowerment. At last, they were getting adults to listen to them, and it was intoxicating.
John Hathorne commenced with the proceedings. “Bring in the accused, Bridget Bishop….”
~Buying Links~
Grab the kindle/Nook book at just $0.99 or Rs. 63!
Amazon IN: Kindle Book
Amazon US: Paperback | Kindle Book
B&N: Nook Book
~Meet the Author~

S.R. Mallery has worn various hats in her life. First, a classical/pop singer/composer, she moved on to the professional world of production art and calligraphy. Next came a long career as an award winning quilt artist/teacher and an ESL/Reading instructor. Her short stories have been published in descant 2008, Snowy Egret, Transcendent Visions, The Storyteller, and Down In the Dirt.

Some men go to war for the glory. Some men go to war to escape. For Scott Remington, war is entirely different. It is a belief. It is a calling. It is a destiny. Leaving everything behind—his fiancée, his future, his life—he embarks on a mission of faith into a battle he can barely understand. This is his story. This is his war. This is only the beginning.

The Dawn of Destiny audiobook project is a full adaptation of the first book in the Epic series. It’s not your typical “audiobook,” even though technically that’s what it is. When people hear “audiobook,” there’s a certain type of thing that usually comes to mind. Most likely it’s the thought of someone reading a book to them, occasionally with music playing in the background. This isn’t that.

What you’re going to hear in this project, is more of an audio “experience,” the audio equivalent of a summer blockbuster movie. Over thirty voice actors played a role in this. This is ear-splitting sound effects, bombastic music, and characters shouting back and forth in the middle of a war zone. This is unlike anything you’ve ever heard.

Born and raised in Cajun country, Lee Stephen spent his childhood paddling pirogues through the marshes of South Louisiana. When he wasn’t catching bullfrogs or playing with alligators in the bathtub (both true), he was escaping to the world of the imagination, creating worlds in his mind filled with strange creatures and epic journeys. This hasn’t stopped.

Now a resident of Luling, Louisiana, Lee spends time every day delving into the world of Epic, the science-fiction series that has come to define him as a writer and producer. Alongside his wife, Lindsey, their son, Levi, and their dog, Jake, Lee has made it a mission to create a series that is unique in its genre—one unafraid to address the human condition while staying grounded in elements of faith.

In addition to writing, Lee works full-time for the Department of Homeland Security & Emergency Preparedness. He has also spent time as a church deacon, guitar hobbyist, and New Orleans Saints season ticket holder. He is a graduate of Louisiana College in Pineville.

Where to buy the book: 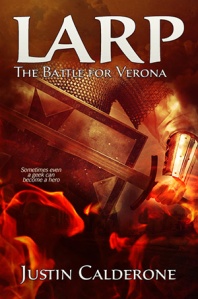 Sometimes even a geek can become a hero.

Dennis and his friends have been LARPing (Live Action Role Playing) since high school. Now, in his 20s, Dennis is seriously considering giving up LARPing for good. He’s tired of dealing with his overzealous friend Mark; he’s tired of his older brother Brad’s constant put-downs; and he’s tired of the fact that he doesn’t have a girlfriend.

Not a girlfriend, but the girlfriend. Alyssa–the one woman he’s been pining over for years.

Dennis and his fellow LARPers have never been considered cool, in their small island community of Verona, located off the coast of Washington State.

While Dennis and his friends are attending a big LARP tournament on the mainland, a rogue terrorist group of Mongolians in medieval garb, led by an American madman, invade Verona and take its citizens hostage–including their families and friends.

When the LARPers find out what’s happening in their home-town, they do what any dedicated LARPer would do: they put on their armor, strap on their swords, and fight their way home–LARP-style! 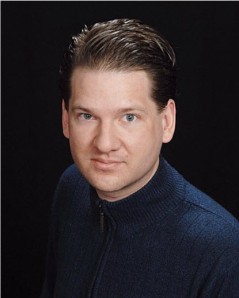 A writer with a passion for inspiring teens and young adults, Justin Calderone debuted his first novel LARP: The Battle for Verona in December 2012.

Calderone, 36, began his journey as a writer nearly 20 years ago after reading Jack Kerouac’s Desolation Angels. He is the author of the 2004 collection of contemporary poetry Revolutions.

An English teacher at his alma mater, Penn Hills High School, Calderone lives in his hometown of Verona with his wife Emily and 1-year-old son Sam. He enjoys watching baseball, listening to music and has a special place in his heart for Spiderman.