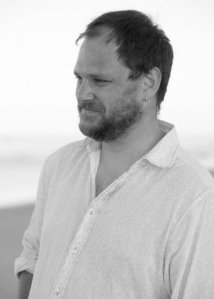 Today I’m welcoming Dean Mayes, author of Gifts of the Peramangk. Thank you for stopping by, Dean!

Dean Mayes has established himself as an author of great passion and literary style since releasing his first novel The Hambledown Dream in 2010.

When not writing, Dean practices Intensive Care Nursing in Pediatrics. He lives in Adelaide, Australia with his partner Emily and his children Xavier and Lucy.

I began taking my writing seriously back in 2007 although, at that time, I had virtually given up on the idea of ever being published. But I had a story that I desperately wanted to tell so I started a blog and began writing this story in installments, putting it up week by week and expecting nothing to come of it. You can imagine my surprise then when, all of a sudden, I had this audience which had a voracious appetite for what I was writing. And it just so happened that one of those audience members was a woman who is now my publisher, Michelle Halket of Central Avenue Publishing. She strongly suggested that I should take this story I was writing more seriously and, to cut a long story short, that blog became my first published novel – The Hambledown Dream (2010).

It’s really a rather nebulous and random phenomenon and it arises out of the most mundane experiences of life. Often I’ll be inspired by my surroundings. I might pass by a certain tree which will touch off a whole slew of ideas and thoughts or I’ll catch the aroma of the lemon tree outside in my garden. Buildings tend to inspire the literary in me – particularly old buildings which are a feature of the city of Adelaide where I live. There are a number of examples of quite gothic architecture that will inspire thoughts and moods which I will eagerly write down in my journal. I carry a notebook with me most places these days because the inspiration to write hits me quite often.

3. How did you come with the idea for your current story?

My current novel “Gifts of the Peramangk” grew out of a desire I had to write a story about Aboriginal Australians. I’ve had the opportunity to work with many Aboriginal Australians in my role as a Nurse and I felt myself drawn to their culture which evolved into a need to understand their culture. I wanted to marry the idea of a child prodigy who possesses an incredible talent with the violin with an exploration of one of the darkest periods in Australian modern history – the so called White Australia Policy and its resultant Stolen Generations – and craft an inspirational novel with characters the reader can cheer for.

4. Tell us about your writing process. Do you outline, or are you more of a seat of your pants type of a writer?

I’ll outline in a basic sense, creating a skeleton of a story which has defined “milestones” that I know I want to reach. Once I have that in place, I tend to switch to an organic style of writing that allows me to go with my gut. Often times, my characters will drive the story forward and if they do something that appeals to me, I’ll go with it, rather than stick to a predefined arc that locks me in. I find that some of my best story telling happens when I remain open.

5. What is your favorite scene in the book? Why?

In “Gifts of the Peramangk” there is a scene where my protagonist, Ruby Delfey, is performimg a piece of music that no one has ever seen before, having only read it for a few minutes before performing it. Because of her uncanny ability, Ruby is able to commit the piece to memory almost immediately and the result stuns everyone around her. I loved writing this scene in particular because I created a piece of music which tells of a group of POW’s in a Nazi death camp. It is essentially only imagery and I had Ruby walk us through the scene by imagining herself within the camp and translating the feelings of the prisoners in a cell block just before they are liberated. It is a powerful scene and one that required no editing after I completed it.

6. What is your most interesting writing quirk?

I mentioned earlier that I carry a notebook with me almost everywhere I go in case a happen to have an idea that I just have to get down otherwise I’ll forget it. I also never EVER use a pen in my notebook. I only ever write with a lead pencil. It feels wrong to use anything else.

7. What is your usual writing routine?

I devote every Monday and most Fridays purely to writing, while in between times, I’ll try and grab every opportunity to add some output. Usually this means taking time out during meal breaks at work or in the morning after I get home from work (as a Pediatric Nurse – I work a lot of night duty). My routine tends to be in flux a lot but Mondays and Fridays are a given for me.

8. What is the highest goal that you desire to meet as an author?

I’d like to see my novels get into the hands of as many readers as possible now that I have established myself. But marketing and promotion is a never ending endeavour which I’ve yet to fully master so, at this point, becoming more recognized is my medium term goal – as well as writing more books.

9. Who is the one author that you would love to meet someday and why?

I’ve long been a fan of Simon Winchester who has written a number of titles – notably “The Surgeon of Crowethorne” and “The Map That Changed The World”. Though he writes non fiction, he has the remarkable ability to turn potentially mundane and obscure topics into thoroughly engaging and absorbing works. I have to confess that I regard him as a sort of personal hero of mine.

10. What is the best piece of advice you would give to someone that wants to get into writing?

Be passionate about your story and really do pour as much effort into researching it and brainstorming it as you can. Also, map your story out in a skeleton form first but be open to writing in a non linear fashion. Don’t be afraid to jump around that skeleton if you’re finding you are struggling with a certain part of it. This is one strategy I’ve employed to beat writer’s block.

11. What is in your To Read Pile that you are dying to start or upcoming release you can’t wait for?

I recently ordered “Bleeding Heart” by South African author Xavier Saer who I have begun to correspond with and who has been incredibly kind and generous. I’ve basically cleared the decks in anticipation of his book arriving in the mail. I’m also doing a beta read for a dear friend of mine from Seattle – author Molly Ringle. She has a forthcoming novel called “Persephone’s Orchard” which promises to be a wonderful novel.

12. How do you spend your free time? Do you have a favorite place to go and unwind?

During the summer months I like to sail my yacht in the waters off Adelaide. It is a little 14 footer that has been in my family for something like 30 years. I love sailing and now that my son is 6, he’s beginning to take a shine to it as well. I also fancy myself as a cottage gardener and am increasingly growing a lot of my own produce at home. I am a hopeless foodie.

I would love to go fly fishing with Harrison Ford.

14. What do you have in store next for your readers?

I am in the very early stages of planning for my next novel which I hope to complete in the next 12 months. I’ve currently attached a working title to it – “The Recipient” and at this point, all I’ll say about it is that it is going to be a nasty little psychological thriller.

I am a Star Wars fanatic. It is really unhealthy. 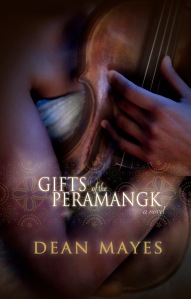 Gifts of the Peramangk

In 1950s Australia, during the height of the divisive White Australia Policy, Virginia, a young Aboriginal girl is taken from her home and put to work on an isolated and harsh outback station. Her only solace: the violin, taught to her secretly by the kind-hearted wife of the abusive station owner. However, Virginia’s prodigious musical gift cannot save her from years of hardship and racism.

Decades later, her eight year old granddaughter Ruby, plays the violin with the passion Virginia once possessed. Amidst poverty, domestic violence and social dysfunction, Ruby escapes her circumstance through her practice with her grandmother’s frail, guiding hand. Ruby’s zeal attracts the attention of an enigmatic music professor and with his help, she embarks on an incredible journey of musical discovery that will culminate in a rare opportunity. But with two cultural worlds colliding, her gift and her ambition will be threatened by deeply ingrained distrust, family jealousies and tragic secrets that will define her very identity.