About Murder on Honky-Tonk Row 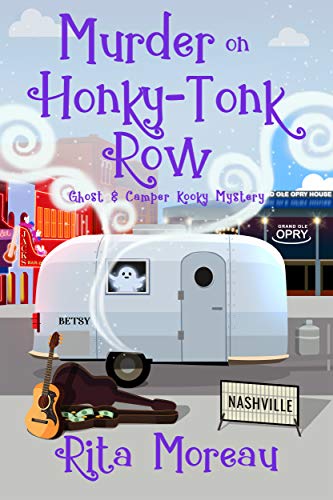 Will camping in the country music capital have Mabel kicking up some saw dust… or line-dancing to her doom?

Despite their good deed in Savannah, Mabel Gold’s ghostly friend Irma remains stuck in Purgatory. So when the plucky sixty-something divorcée pulls her haunted vintage camper into a Nashville campground, she’s expecting Irma to accompany her on the tour of the Grand Ole Opry. But as they two-step into a honky-tonk for some live tunes, they’re shocked to encounter two lost spirits stranded there for the past twenty years after their double homicide.

Though St. Peter hints that solving the long-closed case could get Irma through the Pearly Gates, Mabel has little time to uncover the culprit before she’s due to boot-scoot off to the Badlands. But when shady financials surface and threaten to ruin the honky-tonk owner’s run for governor, trying to help the poor souls pass on could land the fearless sleuth in a whole heap o’ trouble.

Can Mabel collar the killer before she’s singing country-western with choirs of angels?

Murder on Honky-Tonk Row is the second book in the lighthearted Ghost & the Camper kooky mystery series. If you like wacky characters, quick-witted banter, and crooners with a twang, then you’ll love Rita Moreau’s clever caper.

August 6 – Books to the Ceiling – REVIEW

August 7 – Escape With Dollycas Into A Good Book – SPOTLIGHT