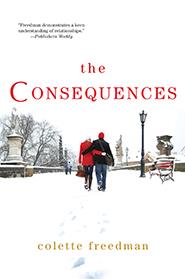 In the riveting follow-up to her acclaimed debut novel, Colette Freedman explores the aftermath of infidelity from three different perspectives–husband, wife, and mistress.

The end of an affair may be only the beginning.

Over the course of one tumultuous Christmas Eve, Kathy Walker confirmed her suspicions about her husband’s affair, confronted his mistress, Stephanie, and saved her marriage. She and Robert have eighteen years, two teenagers, and a film production business between them–plus a bond that Kathy has no intention of giving up on. Yet though Robert is contrite, Kathy can’t quite silence her doubts.

While Robert reels from his wife’s ultimatum and his mistress’s rejection, Stephanie makes a discovery: she’s pregnant. Her resolve to stay away from Robert wavers now that they could make a real family together. And in the days that follow, Stephanie, Robert, and Kathy must each reckon with the intricate realities of desire, the repercussions of betrayal, and the secrets that, once revealed, ripple through lives and relationships in thoroughly unexpected ways.

An internationally produced playwright with over 25 produced plays, Colette was voted “One of 50 to Watch” by The Dramatist’s Guild.

Her play Sister Cities was the hit of the 2008 Edinburgh Fringe and earned five star reviews: It has been produced around the country and internationally, fourteen times including Paris (Une Ville, Une Soeur) and Rome (Le Quattro Sorelle). The film version has been optioned and is in pre production.

She has co-written, with International bestselling novelist Jackie Collins, the play Jackie Collins Hollywood Lies, which is gearing up for a National Tour. In collaboration with The New York Times best selling author Michael Scott, she wrote the thriller The Thirteen Hallows (Tor/Macmillan).

Her novel The Affair (Kensington) came out January 29, 2013. The play of the novel earned both critical and commercial success as it toured Italy February through May 2013.

Her novel The Consequences (Kensington) came out January 28, 2014.

I think just like every other writer I know, I began my writing life as a reader. Even now, when new writers ask me “The Secret of Writing”, I always ask them what they have just read. Those who can give me a list of recently read titles, I know have a shot; those who tell me that they do not have time to read … well then, it will be tough for them to be a writer. I have always loved to read and, as a child, devoured everything from Ballet Shoes to the Betsy-Tacy and Tib series to the complete set of The Bobbsey Twins. As I read other people’s stories, I started to write my own. First, on looseleaf paper, then on yellow pads, then on typewriters, finally on computers. I’ve been writing my entire life, but making a living doing so for the last ten years.

Everything except sitting at my desk. Hiking, dinner with friends, cycling. I’m constantly getting ideas, but, strangely enough, it is always when I am away from the computer, I am most inspired. Then I simply need the discipline to sit down and actualize the ideas in my head and form them into a play, script or novel. Also, like most writers, I write for myself. I marinate a “what if…” and know that I have to flesh it out so that I know how the story ends. (Often I don’t when I start, but as the story unfolds, the ending appears.)

3. What is your favorite scene in a book? Why?

The last scene in Gabriel Garcia Marquez’s 100 Years of Solitude. I’ve never seen an entire book summated so brilliantly as this. Usually, I enjoy the journey of reading a book. In this case, it was about the destination.

I think this is the question writers struggle with all the time. What do you want as a writer? Often people assume writers write for critical and commercial success – and that is true of course (though the two often do not come hand in hand. Critically successful works have failed and commercially successful books are often panned by the critics.) If you are writing, you want to be successful, because you want as broad an audience as possible. We write, first and foremost for ourselves, but also for readers: we need that audience. But if I have a single goal it is to inspire the next generation of writers, in the same way I was inspired by the generation before me.

Ann Patchett. I think she is utterly brilliant. And, in addition to being a phenomenal writer, she owns an independent bookstore.

6. What is the best piece of advice you would give to someone that wants to get into writing?

Read. If you are a reader, than you can be a writer. Don’t discriminate. Read everything from Science Fiction to humor essays. Expand your mind and then tell your story or stories. Also, learn how to type: it will save your hands immense damage in years to come!

7. Tell us three fun facts about yourself.

I was an All American Athlete.
My favorite pizza is anchovy and garlic.
I have two spectacular greyhounds.