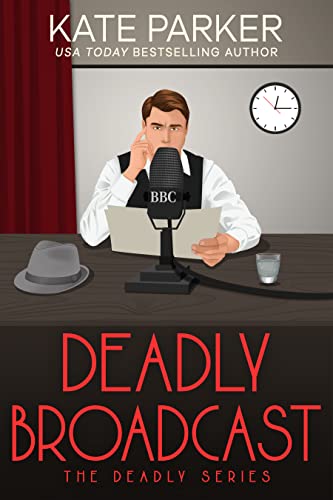 The phony war has dragged out past Christmas into a dark and dreary New Year, 1940.

In the blackout, someone murdered BBC engineer Frank Kennedy, making him more popular dead than alive. A blackmailer and bully, he sold out his friends, assaulted his Broadcasting House colleagues, and sabotaged his employer.

Kennedy was also a government informant against the IRA. Despite arrests of members, the IRA is still planning more attacks against British civilians. Attacks Frank Kennedy might have been involved in.

Britain’s counterintelligence spymaster orders newspaper reporter Olivia Redmond to find Kennedy’s killer and learn which of the many motives led to his murder. Olivia quickly learns how vicious Frank Kennedy was and halfway hopes his killer escapes hanging.

Until his killer strikes again…

A clean read. No blatant sex, violence, or bad language.

Since she was unable to build a time machine in her backyard, Kate Parker immerses herself in research and then creates the world that lives inside each book that she writes. Her favorite place is London and her time travel destination is anywhere from the late Victorian era through World War II. Since she lives in the Carolinas with her daughter and a 95-pound puppy, the practical side of her is thankful for air conditioning and all the modern comforts of life. Comforts she will take with her if she ever figures out how to build her time machine.

March 10 – I Read What You Write – AUTHOR INTERVIEW

March 12 – Escape With Dollycas Into A Good Book – AUTHOR INTERVIEW